Tropes associated with the Arcas: 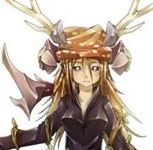