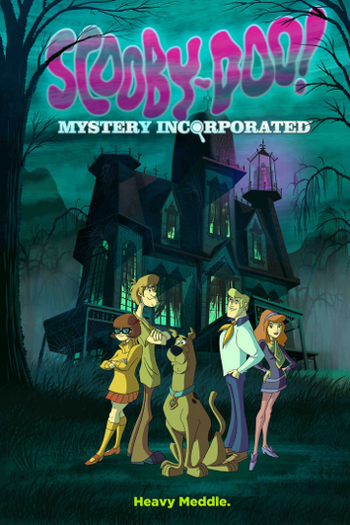 The good old gang, a little different from how you may remember them, in a Darker and Edgier setting.
"You don't know what you've uncovered... A truth that should have remained hidden—the truth behind the curse of Crystal Cove! The real mystery has just begun."
— Mr. E
Advertisement:

This series offered a fresh take on the franchise that could be best described as a bizarre meta-parody/deconstruction of Scooby-Doo. A Darker and Edgier approach aimed at an older audience than usual, Mystery Incorporated was prone to Lampshade Hanging and hosted a more tongue-in-cheek, sardonic sense of humor that poked fun at not only the Scooby-Doo franchise and other characters from the Hanna-Barbera library, but also other works of horror fiction, covering a wide range of film, TV and literature Shout Outs.

After Scooby and friends have solved many of the mysteries around their hometown of Crystal Covenote There is an actual place in southern California called "Crystal Cove," but it's actually state park rather than a city — whether or not the show's locale is based on it is not clear., the town decides it's had enough of them debunking all their prospective tourist attractions and cracks down on Mystery Inc.'s mystery solving. But no one, not overbearing parents, nor an obnoxiously obstructive sheriff, nor a mayor who's more interested in tourism than solving crimes (and also an overbearing parent), nor the mysterious Mr. E and the supposed curse of Crystal Cove, can stop Mystery Inc.! As such, Hilarity Ensues... at least, at first.

While featuring a typical Scooby-Doo formula of Monster of the Week that is unmasked at the end, the series also contains a Myth Arc revolving around a cursed treasure buried under the town which slowly and steadily pours on the Nightmare Fuel. Vote here

for your favorite episode.

The history of the Evil Entity, what he has done throughout the centuries, and his ultimate goal.

The history of the Evil Entity, what he has done throughout the centuries, and his ultimate goal.