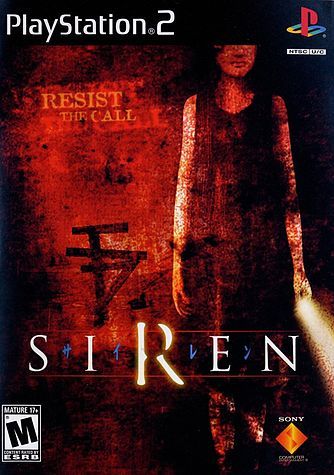 Come to Hanuda. But you can never leave.
... I see... you've resisted the temptation of the sirens for decades, lying here... Everlasting life means everlasting pain...
Advertisement:

Siren is a series of Stealth-based Survival Horror video games. The series is the Spiritual Successor to the original Silent Hill, directed by Keiichirō Toyama. Through heavy use of Switching P.O.V. and Anachronic Order, each game tells the story of several people caught up in the netherworld where they are faced with a supernatural threat over the course of several days.

Unique game mechanics include "Sightjacking", the ability to see through your enemies' eyes, and thus know their patrolling and movement patterns, and the fact that enemies cannot be permanently killed, although with the extremely rare circumstances allowing for one to be physically removed from the stage.

In Siren (2003) (aka Forbidden Siren in Europe), a group of people are trapped in the mysterious mountain village of Hanuda, and swept up in a plot to resurrect/resummon an Eldritch Abomination into this universe.

The 2006 sequel, Siren 2 (Forbidden Siren 2 in Europe) takes place in an isolated island and features an entirely different cast, who must stop a pair of evil beings, sealed away long ago, from returning to this earth. One important change in the sequel is that conventional weapons — including more actual, modern firearms — are far more widespread, and one can even take them off of fallen enemies whenever they want rather than only in specific instances, though with the caveat that enemies then get whatever you left them with once they awaken. Sadly, it was never released in North America.

A remake was released on the PlayStation 3 in 2008. Siren: Blood Curse (Siren: New Translation in Japan) adds Americans to a roster that are composite expies of the original cast members in a re-imagining of the first Siren, a likely Shout-Out to Western adaptations of classic J-Horror films like Ringu/The Ring and Ju On/The Grudge.

Currently, the series consists of three games, a movie, and two manga adaptations, with the latter being serialized in 2014 with creative work done by Sony Computer Entertainment production crew veterans.

The Siren series provides examples of: