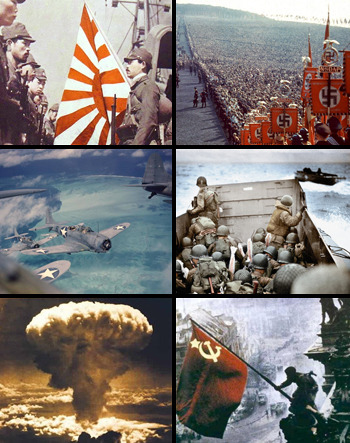 Humanity's best and worst were displayed for all the world to see, all colourised.note Clockwise from top-right: A Nazi parade, US troops in a LCVP landing craft on the 'D-day' (initiation of mass-combat) of Operation Overlord, the flag of the Soviet Union is raised over the German Reichstag (this is the second, staged, photo), the 'mushroom cloud' immediately following the atomic bombing of Hiroshima, US Navy Air Force Douglas SBD Dauntless bombers flying over a Pacific atoll, and Imperial Japanese sailors at attention
Advertisement:
"I ask you: Do you want total war? If necessary, do you want a war more total and radical than anything that we can even imagine today?"
— Joseph Goebbels, Sportpalast speech,

World War II, or the Second World War (often abbreviated as WWII or WW2), was a global war fought from 1939 to 1945. Nazi Germany's invasion of Poland is generally accepted as the start date of World War II, though several other conflicts that would be incorporated into the larger international conflict were already underway—the largest of which was the Second Sino-Japanese War, which "officially" started in 1937 but had been ongoing in some form since 1931. Many citizens of Russia/the old Soviet Union and the United States also generally consider 1941 to be the start date, June 22nd for the former at the start of Operation Barbarossa, the German invasion of Russia, and December 7th for the latter following the sneak attack on Pearl Harbor, when Germany and Japan both declared war on the US. It involved 62 out of the 73 existent/independent states at that time, which eventually formed two loose, opposing military alliances: the Allies or Allied powers (China, France, the UK, the USA, the USSR among others) against the Axis powers (Nazi Germany, Fascist Italy, Imperial Japan and various smaller countries allied to them).

World War II is most commonly described as having been fought in two main theaters of war.note There were also relatively minor skirmishes, bombings, or other actions in other portions of the world such as in the Arctic, North America, the Middle East, and the South Atlantic, but essentially they were the most extreme geographic outliers of the two main theaters. The European Theater was the conflict between the Allied Powers against Germany, Italy, and their European allies. This conflict was fought not only in Europe, but also in the Atlantic Ocean and North Africa. The conflict began with the invasion of Poland in September 1939 and ended in May 1945 with the fall of Berlin. The Pacific Theater was the conflict fought between the Allies and Imperial Japan in the Pacific Ocean and Asia, which also included some action in the Indian Ocean. This conflict was born out of the Second Sino-Japanese War which started when the Japanese Empire invaded China in July 1937. This war became part of the 'world war' proper when Japan attacked Allied and American territories in December 1941.

It was the most intensive and extensive war in history, with more than 100 million people serving in military units. In a state of "total war", the major participants eventually placed their entire financial, industrial, and scientific capabilities at the service of the war effort, thereby erasing the distinction between civilian and military resources. This included the enslavement of enemy POW and civilians as manual labourers, or coerced 'recruitment' as police and soldiers, by the Axis powers. The European Axis powers also perpetrated a number of genocides to maximise their economic performance and national security during the war. These programmes of enslavement and genocide are considered part of The Holocaust, which was integral to the War Aims of the European Axis. Had they been victorious, these programmes would have been expanded considerably.

The war was also marked by the large-scale aerial bombardment of civilian populations and the only use of nuclear weapons in warfare, and resulted in some 50 to 70 million dead (some higher estimates go to a nice round 100 million by counting the unborn... or just by simple, and usually not deliberate, miscountingnote One infamous error made by someone compiling figures for military dead, missing, and wounded in the Soviet-German War/Ostfront was made by someone missing a zero, thereby claiming that a Soviet force lost more troops in a single operation/campaign than there were in the entire Red Army. Someone else also arrived at an infamous estimate of 40+ million Soviet dead (versus a usual estimate of no more than 28 million) during the war by effectively miscounting 'wounded' soldiers as 'dead' soldiers (no more than 20-30% of 'wounded' soldiers died at any point; this guy assumed that it was considerably more than that) and failing to account for the Poles ethnically cleansed (forcibly evicted) from the western USSR in the immediate post-war period. Although the USSR was supposedly his specialty, he also put the Chinese deaths at 30-40 million (versus a usual estimate of no more than c.10-20 million) by choosing the highest possible estimate of war-dead and attributing the c.10 million dead of the later Chinese Civil War and post-war CCP purges (1946-50) to the Sino-Japanese War (1937-45). This is how he managed to arrive at a figure of 100 million dead, even though there's really no way it could've been more than 70. ) - making this war the deadliest and costliest conflict in human history.

Other impacts of the war in pop culture:

Each chorus of Sabaton's "Aces in Exile" describes a different squadron of non-British pilots who fought with the Royal Air Force in the Battle of Britain, with different rhymes to fit the new wording: the Polish-crewed 303 Squadron RAF, the Czechoslovak 310 Squadron RAF, and 401 Squadron Royal Canadian Air Force.

Each chorus of Sabaton's "Aces in Exile" describes a different squadron of non-British pilots who fought with the Royal Air Force in the Battle of Britain, with different rhymes to fit the new wording: the Polish-crewed 303 Squadron RAF, the Czechoslovak 310 Squadron RAF, and 401 Squadron Royal Canadian Air Force.