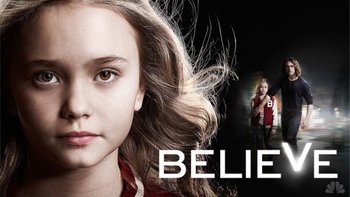 Believe was an American TV series that aired on NBC, created by Alfonso Cuarón and Mark Friedman; Cuaron also directed the pilot, with he and J. J. Abrams among the executive producers. It tells the story of Bo, a young girl with paranormal abilities, and the ex-con hired to protect her from a sinister conspiracy to control her.
Advertisement:

The show debuted on March 10 2014. Faced with a difficult timeslot (Sunday nights at 9, opposite Cosmos: A Spacetime Odyssey and Game of Thrones), it was cancelled after only one season.