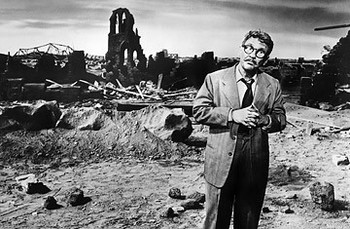 And then it gets worse.
Rod Serling: Witness Mr. Henry Bemis, a charter member in the fraternity of dreamers. A bookish little man whose passion is the printed page, but who is conspired against by a bank president and a wife and a world full of tongue-cluckers and the unrelenting hands of a clock. But in just a moment, Mr. Bemis will enter a world without bank presidents or wives or clocks or anything else. He'll have a world all to himself...without anyone.
Advertisement:

Henry Bemis (Burgess Meredith) is an avid Bookworm who loves to spend any time he has reading. Unfortunately, he has a habit of reading on the job, and while reading David Copperfield during his work as a bank teller, he shortchanges a customer and gets chewed out by the bank president. His home life is no better, as his wife constantly takes away, hides, or outright ruins his reading material.

The next day at work, Bemis locks himself in the bank vault during his lunch hour just to have some time to read. As he reads a newspaper headline that declares "H-Bomb Capable of Total Destruction," the vault is suddenly rocked by a massive explosion, which results in Bemis being knocked unconscious. When he awakens and recovers his glasses, he leaves the vault to find the bank, the city, the world, and everyone in it are gone. The whole world has been destroyed by a massive nuclear attack, and Bemis only lived because the vault protected him.

Advertisement:
Rod Serling: Seconds, minutes, hours. They crawl by on hands and knees for Mr. Henry Bemis, who looks for a spark in the ashes of a dead world. A telephone connected to nothingness. A neighborhood bar, a movie, a baseball diamond, a hardware store, the mailbox of what was once his house and is now a rubble; they lie at his feet as battered monuments to what was but is no more.
Henry: Helen! Helen! Where are you!
Rod Serling: Mr. Henry Bemis, on an eight hour tour of a graveyard.

After some time, Bemis realizes that he's now all alone on a ruined earth with food to last him a lifetime, but no one to share it with. He's driven to the depths of despair and is about to shoot himself in the head. However, he spots something that raises his hopes: The city library. It turns out all the books in the library survived the blast, and now he has all the time in the world to read.

He happily sorts the books into the order he wants to read them in, giddy with anticipation of all the reading he's going to do. As he bends down to pick up the first book, however, he stumbles, and his glasses fall off his face and shatter. Being Blind Without 'Em, Bemis goes into shock, crying "That's not fair. That's not fair at all! There was time now! There was all the time I needed! That's not fair!" The episode ends with Bemis sobbing uncontrollably, surrounded by books he now can never read.

Rod Serling: The best laid plans of mice and men...and Henry Bemis, the small man in the glasses who wanted nothing but time. Henry Bemis, now just a part of a smashed landscape, just a piece of the rubble, just a fragment of what man has deeded to himself. Mr. Henry Bemis...in the Twilight Zone.