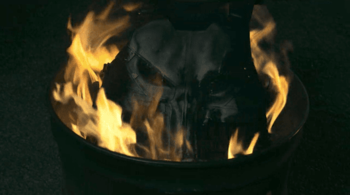 Picking up where we last saw him in Daredevil (2015) season 2, Frank Castle is traveling around the country killing off members of the gangs involved in his family's death. We first see Frank chasing down a pair of Dogs of Hell bikers on an Alabama backroad, then running them over with a van. Later, he snipes a cartel member who was there that day in Ciudad Juarez, Mexico...from across the border in El Paso. Lastly, he takes out the last member of the Kitchen Irish by strangling him in a toilet stall at John F. Kennedy International Airport as he's preparing to leave for Dublin. His revenge complete, Frank tosses his skull vest in a trash can and burns it.

Six months later, Frank is laying low in New York City, working on a construction site in Brooklyn under the assumed name 'Pete Castiglione'. He spends his days continuously hacking away at walls with a sledgehammer to vent his built-up rage, and also puts up with the bullying of his colleagues. Nevertheless, Frank manages to make a friend in the form of a new recruit, Donny Chavez, who lives in Queens with his grandmother after his parents were killed in a car accident.

Frank doesn't completely separate himself from his past life. On a regular basis, he travels into Manhattan to pay visits to his friend Curtis Hoyle, a former Navy Corpsman and insurance salesman who runs a support group for veterans. Curtis, who lost the lower part of his left leg to a suicide bomber and now sports a prosthetic, is the only person from the old days that Frank has maintained contact with since faking his death. Curtis seeks to provide Frank with some words of wisdom and also passes him literature to read from time to time. He is also in the midst of trying to assist Lewis Wilson, a discharged Army veteran who feels rejected by the country and is visibly suffering from PTSD.

Over in Manhattan, Special Agent Dinah Madani reports to work at the Department of Homeland Security's New York field office. She has returned to New York City after a posting in Afghanistan. Her top case is the murder of her partner Ahmed Zubair, an Afghan National Police officer who was kidnapped by US soldiers he caught trafficking heroin, tortured on video, shot in the head execution-style, and buried in an unmarked grave. When she tries to convince the Special Agent in Charge Carson Wolf that this case has merits, he shoots her down citing the case as off-limits. Nevertheless, Dinah turns to her newly assigned partner Sam Stein for help. She asks him to dig up everything on file concerning Colonel Schoonover, last year's explosion and drug bust at the docks, and everything they have on Frank Castle. It can't be a coincidence that Frank and Schoonover died one day and twenty miles from each other within New York City limits. It is clear it won't be long before she crosses paths with Frank. It's clear that Ahmed's murder is weighing heavily on Madani, as shown later when she opens up to her mom, a psychiatrist on the Upper West Side, about her lack of faith in the legal system.

Meanwhile, Frank finds Donny trying to make friends with Lance, the leader of the workers who regularly harass Frank. Lance, it turns out, owes money to a loan shark from the Gnucci crime family, who is threatening to break his legs and seize his car. His buddy Paulie manages to get patched in from his cousin about a poker game that a Gnucci outfit gang is holding. It should be a simple job with a jackpot of $70,000. None of the players will be armed as no guns are allowed at the table. The only gun is held by the single guard at the door. Lance and his crew are able to persuade Donny to join along with them for the robbery.

The robbery doesn't go smoothly, as in the midst of frantically scooping cash up from the poker table, Donny accidentally drops his wallet, revealing his driver's license to the Gnucci boss in charge of the game. With the gangsters now knowing Donny's real name, Lance and his buddies take Donny back to the construction site and decide to drown him in the cement mixer. They are stopped by Frank, who proceeds to kill Lance and his friends with his sledgehammer, after getting Lance to give up the location of the poker game. After dropping a rope to Donny, Frank heads to the poker game and guns down all of the gangsters in attendance just as they're getting ready to hunt Donny and torture him for the names of his accomplices. He doesn't notice that his departure from the scene afterwards has been caught on a surveillance camera, which is being monitored by David "Micro" Lieberman. Confirming that he is indeed seeing Frank by comparing the footage from the Gnucci shootout to footage from Frank's attack on Karen Page and Grotto at Metro-General Hospital last year, David smiles and says, "Welcome back, Frank..."