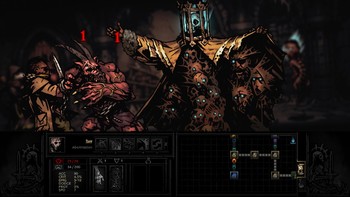 "The twisted faces of the damned, piled high and cloaked in malice."
And their screams will echo amidst the pitiless, Cyclopean stones...
— The Ancestor
Advertisement:

Darkest Dungeon is a Lovecraftian horror-inspired game that pulls no punches in the Nightmare Fuel department. As the Heir witnesses the terrors that lurk in and around the manor, perhaps they can begin to sympathize with their afflicted heroes a lot more easily.