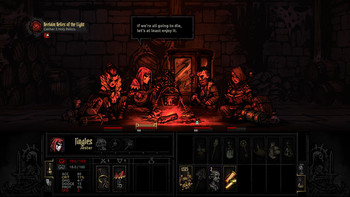 Circled in the dark, the battle may yet be won.
A moment of respite. A chance to steel oneself against the coming horrors..
— The Ancestor
Advertisement:

If one would think that Darkest Dungeon is a Crapsack World filled with nothing but cosmic horror and hopelessness, they'd be wrong.