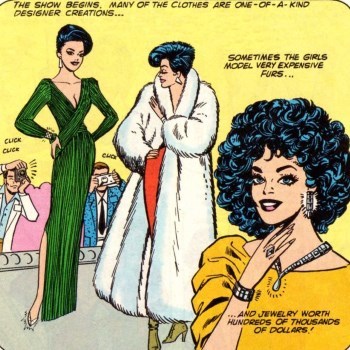 If you think you'll look half as good in these clothes as Katy does, then she's done her job.
"In a way, I suppose, I'd achieved what I set out to do—to wear expensive clothes and be looked at and admired."
— Young Love #50, "Norma The Queen of The Hot Dogs"
Advertisement:

In the earlier decades of Haute Couture, such models were called "mannequins", though that term is now used to refer to store dummies made to model clothes.

In fiction this is often portrayed as a glamorous and enviable profession, especially for women. In the mid 20th century, this was seen as one of the proper professions for ladies (at least until she became a housewife), since it was seen as a passive job, and it made a great excuse for shows to utilize the costuming department. Even today male models are rarely shown compared to women.

Yet works may also acknowledge the downside of the profession. Since models need to look good themselves to help make the clothes look good, this emphasizes an obsession on their appearance. This leads to the stereotype that models are stupid, vain, and shallow. Even worse, the need to keep up appearances can be a source of stress. I Just Want to Be Beautiful is justified in this profession, since the character's livelihood is at stake. Such characters may turn to alcohol and drug use.

If people can stay above those problems, they may become world famous, and dubbed a "Supermodel". In which case just doing their job often doubles as a Celebrity Endorsement.

A School Idol is very likely to either be a Fashion Model or have it suggested that they become one. Characters are often shown in-story to be considered very good-looking by having scouts approach them in the street suggesting they should be a model or actor. Although not all of these scouts are trustworthy.

In fiction, a model who plays any significant part in the story is almost always a woman, although there are exceptions. Realistically, there are of course also many male models who showcase men's clothes (or even women's clothes, sometimes), but they don't get the same attention. Both in fiction and in real life, there is also a preference for white European models, although this is changing as the industry comes to implement increasing inclusivity, tolerance and rejection of restrictive Eurocentric ideals of traditional feminine beauty.

Some characters may try doing this just for fun, or because they they are undercover.

Some real-life actors and actresses started out as professional models.

A Sister Trope to Fashion Designer (who makes the clothes models wear), Hood Ornament Hottie (whatever they wear, they are there to make the car look good) and Fanservice Model (who specializes in lingerie, swimsuits and even sexy costumes).

See also Undercover Model (an officer or agent working as a model, or other related event).

Not to be confused with Only a Model.