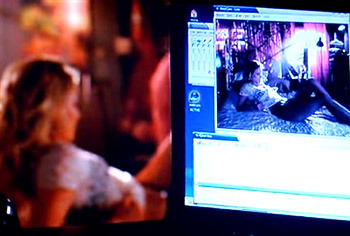 Incredibly, there is now an entirely virtual version of the Cam Whore thanks to the invention of Second Life, where people will turn their avatars into virtual strippers or lap dances in exchange for Virtual money (Lindens). This can then be exchanged for real currency.

This trope can overlap with Single Mom Stripper if she's doing it to support a child. Not to be confused with the derogatory term for people who like to take photos of themselves and upload them on the internet way too often, or with people who insist on being front-and-center in any picture or video taken in their vicinity.