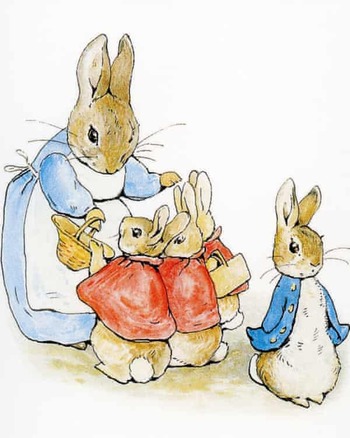 Peter (right) and his mother and sisters (left)
Advertisement:

The Tale of Peter Rabbit was published in 1901 and is Beatrix Potter's first, and most famous children's book.

Peter Rabbit is an anthropomorphic rabbit who lives next door to the (human) farmer, McGregor. His mother's always told him to stay out of Farmer McGregor's garden because Peter's father was killed and eaten there. Of course, Peter foolishly disobeys this advice and sneaks into McGregor's garden to stuff himself on vegetables and get into all sorts of trouble.

. A CGI series based on the tale

A film adaptation was released in 2018, alongside a sequel called Peter Rabbit 2: The Runaway that was released on June 2021.

The original book provides examples of the following tropes: