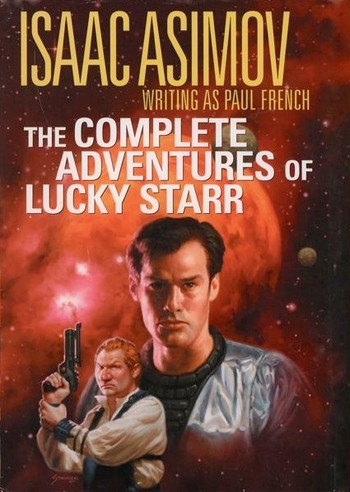 Bigman to the left and Lucky to the right

This is a Science Fiction series, aimed at a juvenile and young adult audience. When it was first published in The '50s, the author was credited as Paul French. It was actually a pseudonym for Isaac Asimov because he wrote these books with an eye towards getting a Hollywood contract for a TV series. He had seen how Hollywood tended to butcher the works of other SF writers, and wanted to be able to disassociate himself from any resulting series, if he had to. After the TV idea fell through, he started adding elements to the later books that clearly labelled him as the author (such as three-laws robots with positronic brains). In The '70s, Fawcett Crest requested the publishing rights to the series, so Dr Asimov made minor edits, added forewords, and republished everything under his own name.

The Starr of the series is David "Lucky" Starr, councilman of Earth's Council of Science. Each Novel is a new adventure against crime and corruption in different regions of the Solar System. He is accompanied by his loyal sidekick, John Bigman Jones, whose short height and shorter temper contrast against the tall, cool-headed hero.

The Complete Adventures of Lucky Starr consists of six volumes:

In his adventures, Lucky meets frontier colonists on several worlds, faces off against unusual alien organisms and hostile space environments as well as ordinary human sabotage. Throughout the series, the predominate threat comes from Earth's rivals in the system of Sirius, Transhuman descendants of Earth who show signs of wanting to take over the Solar System. The stories usually have an element of mystery as well as adventure, with Lucky having to find a criminal hidden in plain sight, and, in true Asimov fashion, the solution can hang on the tiniest point.

The Lucky Starr series was written explicitly with the purpose of teaching young people facts about the solar system, which means that it suffers from changes in scientific knowledge perhaps more than the rest of Asimov's work—the title Lucky Starr and the Oceans of Venus should be a clue as to how inaccurate it sometimes gets. Nevertheless, the books are still very enjoyable as science-fiction adventures, and reprints since 1978 have included a preface discussing said changes as needed.

These Starrs provide examples of: