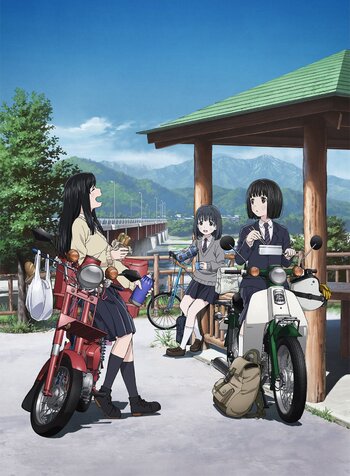 I wonder how far my Cub will take me.note From left to right: Reiko, Shii, and Koguma.
With your Cub, you can go anywhere.
Advertisement:

Super Cub is a Light Novel series written by Tone Koken and illustrated by Hiro. Originally a web novel that ran from 2016 to 2021, it was later serialized in Kadokawa Shoten's own Kadokawa Sneaker Bunko label from 2017 to 2022, and compiled into 9 volumes. It also received a manga adaptation in December 2017 drawn by Kanitan and serialized in Kadokawa's Comic Newtype website. An anime adaptation by Studio Kai premiered in April 7, 2021. The series is currently licensed (outside of South and South Eastern Asia) by Funimation.

Koguma is a lonely girl without parents, money, friends, hobbies, or plans for her future. After many days of going to her school with her bike, she resolves to get a motorbike. She then buys a Honda Super Cub from a local dealer, and her world begins to change, from going to places she never knew, to making new friends.

A realistic Slice of Life story set in the real world area of Mukama, in the city of Hokuto, Yamanashi, Japan.

Super Cub has examples of the following: