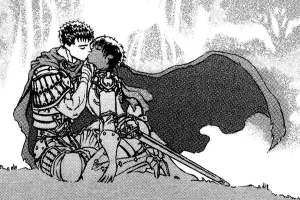 "I, too, want a wound that I can say you gave me."
"My life had been an honest one: I had only my pride, and I owe that to Griffith, but... I'm changing. There may be a place for me in this man's soul. Not because of what I may receive, but for something of worth I may have for him."
— Casca, about Guts
Advertisement:

As one would assume, heartwarming moments in this series are few and far between - and that makes them stand out all the more. Soak in the awww's whenever you can.