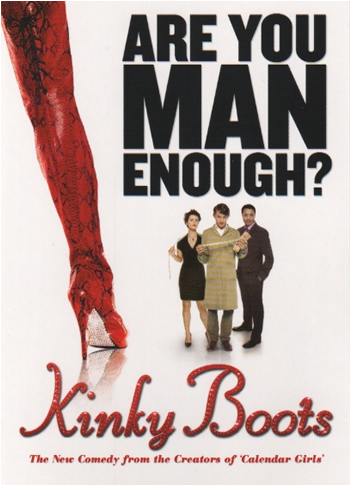 "I don't know what you're used to making here, Charlie-boy, but now you're makin' sex! Two and a half feet of irresistible, tubular sex!"
Advertisement:

Kinky Boots, a 2005 British comedy-drama film named for the song of the same name by the actors from the old 1960s show The Avengers, is the story of Charlie Price (Joel Edgerton), who inherits his father's shoe factory upon his death.

Unfortunately, industry is putting the old-fashioned factory under and his dad's old friends, whom Charlie has known since childhood, out of work. Charlie doesn't really want to keep the factory nor does he exactly feel right letting the factory fail, but old wingtips aren't going to cut it.

The only way for the factory to have a shot at this niche market is to make a splash at the Milan Shoe Expo. Charlie has to persuade the conservative people of his factory to get on board with this rather offbeat plan and raise enough money to get them to Milan, all while struggling with running the factory, dealing with his marriage, and trying to cope with the cognitive dissonance working with Lola is causing him.

A musical Screen-to-Stage Adaptation, with a book by Harvey Fierstein and music and lyrics by Cyndi Lauper, opened on Broadway in 2013 and went on to win the Tony Award for Best Musical.

I can boogie, boogie-woogie, all night long~