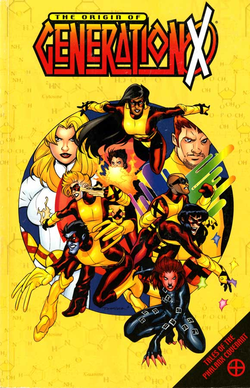 One of the many 1990s spin-off books from X-Men, Generation X told the story of the Marvel Universe's latest group of teenage mutant trainee superheroes. It went through various authors and artists, but was popular for most of its six-and-a-half-year run, before being fairly abruptly cancelled in a deck-clearing exercise at the end of the 1990s.

The book was set in Emma Frost's Massachusetts Academy, which used to be the supervillainous equivalent of the Xavier School, before an incident with a time traveller, some giant killer robots, an accidental body-switch and an evil alien god turned Emma Frost into The Atoner. Her formerly villainous past led to some friction with her students, and with her co-head teacher, reserve X-Man Banshee.

The series was also the basis for a Made-for-TV Movie (if you're curious, there's a full plot summary with screencaps here

A new Generation X title was launched in 2017 as part of the X-Men/Inhumans event Resurr Xion, spawning from the fallout of Inhumans vs. X-Men. It followed Jubilee and a group of misfit mutants who are singled out for not being potential X-Men or ambassadors for mutantkind due to either being unreliable or having weak power sets.

Not to be confused with people born between the mid-1960s and the early '80s, overlap or not (they are a product of the '90s, after all). Nor with Billy Idol's first band.