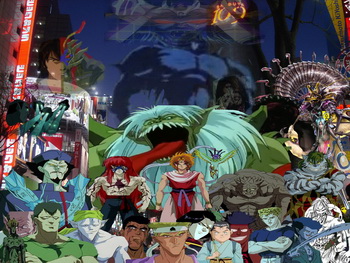 They're back with a vengeance.
open/close all folders
The Taiyoukai Eight

Voiced by: John DiMaggio
Demon Priests
The main antagonists of Yu Yu Hakusho's side in Season 3 entitled, Dawn of Chaos.

Leader of the Demon Priests and Kiryu's older brother.

[[folder:Demon Prisoners]]Old YuYu Hakusho villains that are freed by Arago's forces in Chapter 57 of Dawn of Chaos to begin their cultivation of the human world.

Fellow demons, let us finally take our revenge on the Spirit Detectives and claim this world in the name of Lord Arago!

This time luck won't save you.

Congratulations, your keen senses are much more acute now that you're a monster like us.

Now, behold, the power of the Chimeric Armor!

I witnessed it from the other side. My respect to him and especially you, human.

These pitiful humans think hiding will do them any good? Wait until they meet our cultivated people. So glad we had plenty of spares.