Here is a list of tropes sorted under Kotori Ayami, also known as Valkyrie Brunhilde.

To go back to the main character index, click here.

"Hey, freak. That's the last time I let you use my body again. I hope you're ready to meet your own maker, because Kotori Ayami is back!" 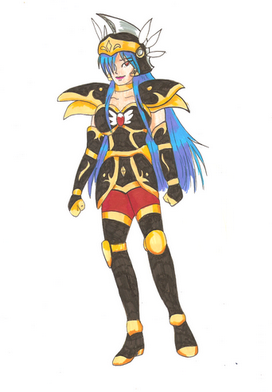 Leader of the destined Valkyrie Maidens and reincarnated from Brunhilde. Her childhood is quite crazy.

As a child, Kotori has dealt with abuse from her mother after her father died in a line of police duty. At school, Kotori is feared by bullies as she takes no hesitation in beating them up. However, one bully named Hamada pushes her down the stairs that led to a coma and died later. In the Underworld Saga, she forms a friendship with Seadramon (formerly the Dark Master MetalSeadramon) and gets acquainted with Himura and Inumon to fight Basilikmon. However, Basilikmon kills Kotori yet again.

In Wrath of Pharaohmon (Season 1), her spirit appears in Himura's dreams to guide him, while in Season 2 (Invasion of the Rajita) she is temporary brought back to life to become her Valkyrie form in facing the Rajita before returning to the afterlife. At one point, she is forced to fight Seadramon controlled by the Orichalcos, but Kotori eventually saves him.

In Valkyrie Advent, she and Himura are now working in the Tokyo Metropolitan Police Department. Kotori receives visions of the other Valkyries, to which she meets Sasha D'Anjou as the awakened Norn and the yet to be awakened Skuld. Thus, after learning information of the maidens, Kotori leads three groups to find her teammates: Sigrun, Gondul, and Skogul, while facing four Drakes. Upon returning to Japan, Kotori and her allies attempt to protect Sasha, while having her first encounter with her arch-enemy, Mist. Mist is about to strike her down, but Philippe sacrifices himself to save his cousin, making Brunhilde enraged and Skuld is awakened by making the portal to Niflheim. With preparations, Brunhilde and her group venture to Niflheim and the Nine Realms to find Philippe's soul.

Kotori's Digimon partner, and also the former Dark Master MetalSeadramon. Blinded himself in rage after Kotori's death, which also served to protect him from Basilikmon's petrification powers.