Having been reincarnated in modern times, I go by Adora Frost. A total cutie with a penchant for English tea, hot guys, and blowing shit up. But underneath this Midgardian exterior, I am Mist the Blood Valkyrie! 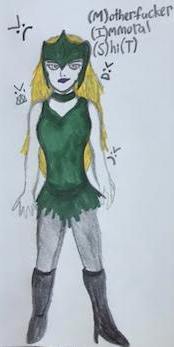 What a hateful whore.
Voiced by: Kari Wahlgren

Loki's enchantress, a dark Valkyrie, and Brunhilde's main enemy. Disguise herself as Adora Frost, she sets out to manipulate Takato to become Loki's host.

After succeeding her mission to retrieve bodies for Loki and his sons, Mist confronts Brunhilde for the first time in Ch. 6 of Valkyrie Advent. She proceeds to torment her constantly till their hate becomes mutual when Philippe sacrifices himself to save Brunhilde. Mist then leaves with the Lokar in order to retrieve Ymir's armor and recruiting evil Norse/Myth armies for the Second Ragnarok.

In her past life shown in Intermission: Brunhilde and Siegfried, she was originally Gudrun and had a brother named Gunnar. Both attempt to have Brunhilde (for Gunnar) and Siegfried (for Gudrun) and Andvaranaut for themselves, but failed. Coming across Loki, Gudrun accepted the trickster's offer to become the Valkyrie Mist.

After a series of events up to the climax of Second Ragnarok, Mist assassinates Loki to wear Ymir's armor in becoming the Lord of Realms and revealing herself as Grimhilde's daughter and successor. Brunhilde as the Silver Valkyrie challenge her to a one-on-one duel. After a fierce battle for the Nine Realms, Brunhilde defeats Mist and renders the wicked enchantress powerless.

Mist is on the run like a homeless figure till she is captured by Cross Generations' main antagonist and Quedesha/Black Odin Triad in forced to serve with them.

Mistruxes
An clone army created by Mist (YYGDM-01). Generally, they are created when Mist infected Lokar soldiers with her ‘STDs’ and turning them to clones of herself. Not only that, but there are also transformed monster abominations with Mist’s faces when she infects certain people.
Grimhilde
Voiced by: Laura Post

The mother of Gudrun/Mist and Gunnar. The witch fought Frigg and the original Valkyries before she was defeated, but she planted her spiritual seed inside Gudrun in readied for her revival.

A being manifested from the combined will of Mist and Grimhilde. She first appeared in controlling Mist's mind upon becoming the Lord of Realms in attempted to end Second Ragnarok. But she is defeated by Brunhilde/Silver Valkyrie.