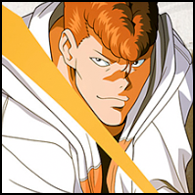 Voiced by: Christopher Sabat
Rival/best friend to Yusuke. Kuwabara possesses strong spiritual awareness, allowing him to see apparitions (even better than Yusuke). He wields the Spirit Sword and an advanced form of said technique called the Dimension Sword (or Jigento).

In Season 1, Kuwabara helps Yusuke, Hiei, and Kurama fight Pharaohmon's minions whilst aligning themselves with the other heroes. In Season 2, he gains the Dimension Sword earlier than expected while fighting Draco (the first Taiyoukai introduced in the series), only to lose it when he's killed by the Rajita leader (he regains his powers and the technique during the Chapter Black Saga like normal). By The Movie, he's already utilized the Dimension Sword's full potential and has been dating Yukina.

In season 3, he and his friends are involved in the war against the Demon Priests. 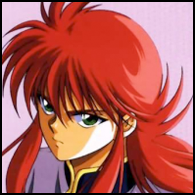 Voiced by: John Burgmeier
Friend and ally to Yusuke. Originally the great bandit thief Youko Kurama, who was fatally wounded and ends up fusing with an unborn child. Born as Shuichi Minamino. Considered the most dangerous and calculated member of the group, possessing a skill of analytical thinking that enables him to search for his opponent's strengths and weaknesses; also forms effective strategies. Capable of controlling plants (demon plants while in his true demon form) and uses the Rose Whip.

In Season 1, he hadn't competed in the Dark Tournament, but reverted to Youko Kurama during a skirmish with Brimstone (formerly one of Pharaohmon's minions). He assists Yusuke, Kuwabara, and Hiei against Pharaohmon's warriors. In the Shadow Tournament, he defeats Brimstone (earning the former minion's respect) but ends up losing to Agunimon. In Season 2, during the Rajita incursion, he is confronted by an old schoolfriend Maya Kitajima, who was abducted and turned into a half-Rajita chimera warrior, and ends up saving her from the aliens' control. After which, he aids the Detectives and the Senshi in the final battles against Ghidorah and Yami Houou. In The Movie, Kurama is involved in the main plot of Demento's plan to revive the Eight Taiyoukai lords; Kurama's soul is used to revive these lords; it ends with Maya retrieving Kurama's soul, saving the half-demon's life. He and Maya are currently in a relationship.

In Season 3, Kurama and his friends are getting ready for the forthcoming war with the Demon Priests.

Voiced by: Travis Willingham
A fire-wielding half-digimon half-humanoid warrior and a former minion of Pharaohmon, who completed a Heel–Face Turn in Season 1. He becomes a member of the group following Season 2. He is currently helping the Spirit Detectives in the Meikai war. His digimon form is Magmusmon.

Voiced by: Stephanie Young
A female water-wielding half-digimon half-humanoid warrior. She debuted during Season 1 and fought Hiei to a draw. She developed a close friendship with the Spirit Detectives and effectively becomes a member of the group. Was drawn to the the black dragon wielder until the Rei Hino/Hiei Crossover Ship became official. Currently, she is aiding the Detectives in the future Meikai conflict. Her digimon form is Sirendramon.

Voiced by: Yuri Lowenthal
Minako Aino's boyfriend. He is a wielder of the Demon Sun Stone, an powerful artifact that grants him demon powers. Currently in Season 3, he (along with his sister Kohana) are involved in the central plot involving the Demon Priests and the Demon Stones. He is getting ready to aid the Detectives in the impending Meikai conflict and to confront his evil brother Kyo.

After battles in the human realm he along with the Spirit detectives go to the Meikai realm to settle things with the Demon priests. During this period they meet a hoard of female demons led by Yasha. She is wary of his pressecense due to the Sun Stone in his body and tensions increase for a moment when a younger demon girl, Nadeshiko, shows hostility towards him.

Eventually he finds out that Kohana ends up kidnapped and is in the Meikai realm. This factor contributes that he can't avoid his fate of fighting his brother and accomplishing the Demon Priests agenda to revive Arago.

When the team finally confronts Kyo and the priests in an all out brawl, the brothers have their inevitable battle with them changing to beast forms. The fight is brutal and in the end it leads to Rio "dying" since his stone contributes to his life.

With his death, Minako/Sailor Venus and his future daughter Ai, feel his death along with his friends that were there. They theorize that Rio (along with his brother) can be revived if they retrieve the stones that end up implanted in Kohana.

After the battle for Kohana's soul and her brothers, the stones are returned to their rightful owners in which Rio is brought back to life.

He aids the heroes in the last fight against Valarmon and Paradais.

Voiced by: Kyle Hebert
Saya Sagara's demon vampire boyfriend and former minion of a demon sorcerer named Demento. He was involved in a subplot in the Taiyoukai Awakening, rescuing Saya from Demento and falling in love with her. He and Saya have a son named Adam.
Neo Spirit Detectives

She is the third oldest child of the Kuroshishi family and is in possession of the Demon Star Stone.

Kohana makes her first appearance in Gaiden; An Idol in Love, where she is a fan of Minako's music. To the blondes's surprise she learns that the red-haired girl is a tomboy and not prone to cutesy stuff but despite that she warms up to her and encourages Rio to pursue her.

Nothing much is said about her during Taiyokai Awakening except that Rio believes her to be fine given she has some form of defending herself.

In the last chapter, she makes her appearance and has transferred to Yui and Aoshi's school, where she is the rival of Yui Tsubasa, their relationship is parallel to Yusuke and Kuwabara. She is also known for having a big busts which she tries to tape down.

Do C is where she is major part of the Spirit/Neo-Detectives storyline of defeating the Demon Priests.

The little brother of Usagi Tsukino/Sailor Moon. In his younger years he spent his time being like any sibling and teasing his sister never knowing she is Sailor Moon.

He doesn't play any significant role in Season 1. In Season 2 he is briefly seen with his soul taking by the Rajita.

Shingo's life takes a turn in SD/SD: Special, where he discovers his sister and the others are the Sailor Senshi. Along with finding out his growing interests in Cammy Hino, that she has spiritual powers. In the end of the story he is still grasping the awareness and decides to be friends with Cammy until he can sort out his feelings.

In Dawn of Chaos, he makes another appearance during Valkyrie Sailor Sedna, Valkyrie Sailor Neo-Moon's battle with Nagah. He shouts out encouragement to his future niece before ending up knocked out from a blast by the head general.

Later he is seen with the Neo-Spirit detectives at Mamoru and Usagi's apartment taking care of the present versions of Chibi Usa, Ryuuhi & Koori. He talks about the summer event with Cammy and is about to finally give her an answer before Kyo attacks them.

When the fighting is going on he ends up getting flung back. As he sees Cammy in danger his own spiritual awakening happens as he grasps an umbrella handle which turns into a scimitar. He becomes Mamoru's other personae, Moonlight Knight.

After the battle he decides to stick with and eventually becomes part of the Neo-Spirit detective team and aids in the contribution to saving Kohana with Yusuke and the others that are in the Meikai.

While there he is still trying to get a use of his new powers, Kurama and Hiei decide to train Shingo in order for him to be prepared for the upcoming war against the Demon Priests.

He continues to aid his friends during the fighting but he and the others are unable to stop the ritual to reviving Arago at the cost of Kohana's body.

Their battle leads them back Spirit World, where it has fallen and them retreating for a reprieve. Usagi and Mamoru are surprised about Shingo's awakening. While his sister is at first surprised his brother-in-law encourages him to continue helping his friends and love.

The final battle to save Spirit world and Kohana is immense but Shingo proves his worth of being part of the team.

In a small note, it is said by Future RJ that Shingo is a good uncle to his niece (and too the Senshi's kids) as RJ still affectionally calls him "Uncle Shingo".