Characters / For Better or for Worse

This is a list of characters in the comic strip For Better or for Worse by Lynn Johnston.

The matriarch of the Patterson family and the main character. She started out as a frustrated housewife who, in a break from the media conventions of the day, did not like housework or raising children at all well — Elly would grow impatient with her bratty children. Her yearning for a greater role in society than "Anonymous Drone Housewife Who Everyone Takes For Granted" informed the early era of the strip while her anxiety about how her children's lives were going informed the latter. She tends to be the "Voice of Reason" as time goes on, usually to her female friends. Based off of creator Lynn Johnston but named after her deceased friend, and meant to reflect the havoc and difficulty of being a homemaker.
Advertisement:
John Patterson 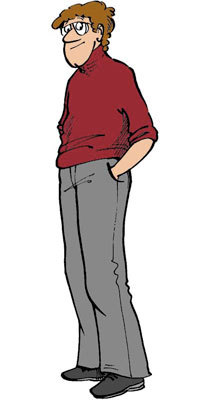 Elly's husband; a successful dentist. Frequently doesn't "get" women, and a running gag is that he'll poke fun at something his wife did (John is extremely snarky, and quick to make verbal jabs), resulting in her getting angry at him. Also spends a lot of time napping after work. However, he's generally a good provider, is rather supportive of his family's amibitions, and acts as a voice of reason. Later has a bit of a mid-life crisis, and develops an obsession with trains. Kind of moves away from prominence in the strip as time goes on. Based off of Lynn's then-husband, also a train-loving dentist.
Michael Patterson
The eldest of John and Elly's three children. Starts out the strip as a very rambunctious little boy, but grows into a mature young man — if a bit overly-obsessed with his work. He becomes a very-successful writer, and ends up having two children of his own with a girl he knew (and feuded with) as a child.
Elizabeth Patterson 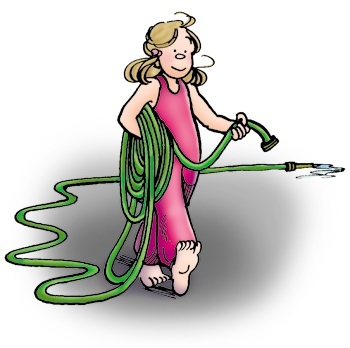 The rather moody middle child of the family. Started life as a bratty young girl, constantly feuding with her older brother, and turned into a bit of an awkward teen with big glasses and a dorky boyfriend. She grew up a lot more glamorous, and started living a bit of an adventurous, exciting life, causing a lot of the strip's fanbase to identify with her character. Unfortunately, they did a "Nerd Gets the Girl" storyline with her, irritating said fanbase, leading to the strip being overwhelmed by what Lynn calls "The Snarkers". Eventually settles down with and marries Anthony, her first boyfriend.
April Patterson

The youngest of the family, and the only child to be born during the course of the strip. Starts out as a standard baby, becomes a bit brattier with age, and turns into more of a "modern teen" with time. While Michael was more of a prankster and troublemaker with a group of similar buddies, and Elizabeth was more of an awkward nerd, April was more of a rebellious type who followed her own path.
Deanna Patterson
Mike's long-suffering wife whom he had a sloppy, embarrassing crush on in the fifth grade and whom he reunited with after a car accident. After they reconnected, the quickly fell in love, got married, and had a pair of children of opposite genders — much like how the strip started out. Largely turns into a "homemaker" character as time goes on, often being a sounding board for Michael's ideas.
Advertisement:
Anthony Caine
Anthony started off as Elizabeth's High School boyfriend. They reconnected as adults, at which point various characters (Liz's parents especially) started shilling how amazing he was. Given that his ambition is to eventually open a bed and breakfast, John and Elly love him to bits because he's so plain and "stable". Pretty much the whole reason the Johnston's online fanbase turned to snarking on the strip — she clearly loved the character, and a few creative misfires (he had a tendency to openly whine and moan about his troubles; his career was basically being an accountant for a local garage/car lot; he wasn't drawn as particularly attractive or interesting) set the audience against him. The online fanbase snarked on him pretty soon after his return to the strip, and this only grew with time — eventually, almost all online commentary about the strip was anti-Anthony stuff, giving the once-popular strip a sizable Hatedom.
Thérèse
Infamous and controversial in the strip, primarily due to her relationship with Anthony. She is immediately introduced as Anthony's serious, humorless, cold wife, who openly resents his relationship with Elizabeth. She is the mother of his child, and it's explained that Anthony more or less had to beg her into breeding, offering to raise the child entirely on his own. The strip makes it pretty clear that she suffered from postpartum depression, grew more and more distant from her husband, and had an affair on him, thus ending the marriage. She abandoned their daughter and left the family, leaving Anthony (who had been carrying on an emotional affair with Elizabeth, begging her to wait for him).

This of course makes her highly interesting to the strip's fandom, which started hating on the Anthony/Liz pairing, and seeing the character in a different light. Given that her suspicions about Anthony were proven correct, she clearly had postpartum, and she had been badgered into having their daughter, she perhaps comes off more sympathetically than writer Lynn Johnston had intended. Thus, a character who only appeared in the last few years of the strip has a much larger "indent" on the comic's TV Tropes page than you would expect.