A detective investigating the murder of Fred Whalen.

Two detectives who interrogate Wormald after police officers discover the secret compartment in his house.

A detective assigned to observe Mike's interrogation about the deaths of Hoffman and Fenske.

An undercover police officer who learns that Jimmy is selling drop phones and decides to intervene.

Portrayed by: Nicholas Liam King (as a child)

Mike's son, and Stacey's husband. A police officer in Philadelphia who was murdered after his corrupt colleagues suspected he wouldn't have their backs. 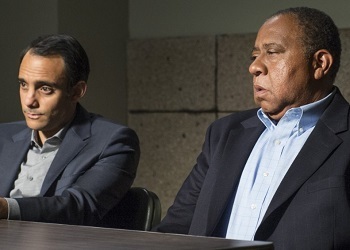 Two Philadelphia detectives brought out to Albuquerque to question Mike.