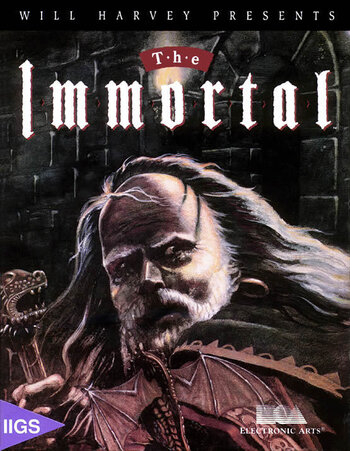 And no, that's not Gandalf.
"An image of the old wizard Mordamir leaps from the candle and begins to speak:
'Dunric, you have come to save me. I am in the dungeons far below. I know I can count on you.'
This explains your old teacher's mysterious disappearance, but there is one thing strange about the message...
Your name is not Dunric."
— The introduction
Advertisement:

The Immortal is an isometric-perspective adventure game created by Will Harvey, originally released in 1990 for the Apple IIGS and ported to the Amiga, Atari ST, Nintendo Entertainment System, IBM Personal Computer and Sega Genesis; the NES port was rereleased on the Nintendo Switch Online Service in July 2020. Your character is a wizard searching the deadly ruins of Erinoch for his lost master Mordamir, who appeared to you in a dream and prompted your quest. The story is told largely through character interactions and your own inferences based upon clues you collect; however, you will spend most of the game dying horribly. For instance, one of the very first things that can happen in the game is that you are given a warning to move quickly. It's more or less the only free warning you will get, and if you choose not to heed it, you are eaten by a worm and instantly killed.

Instant deaths are something that you will become very familiar with over the course of the game. Walked over the wrong square on the map? Worms break through the floor and instantly kill you. Touched that slime? It's viciously acidic and your flesh gets melted. Searched a body too many times? Oh, look, he was killed by that slime hiding in his bones, and since you just touched it you join him. Beyond this, the game also includes hand-to-hand combat sequences with trolls and goblins and other creatures, puzzle-solving, and lots and lots of reloading. Spellcasting is somewhat less prominent than might be expected. Your spells are very situational: it's almost too convenient that a "spell to charm Will-O'-the-Wisps" happens to be found near some Will-o'-the-Wisps. Other spells are mostly tools, rather than a bunch of flashy attacks: you can turn yourself to stone, blink momentarily out of existence, and magnetize your hands. Your spells are all limited-use, and you need every charge you're given.

If you get to the end, you're rewarded with a twist on what seemed a standard fantasy plot, as well as a punishingly tough puzzle for a final boss—and in a game as hard as The Immortal, that's saying something.

NOT to be confused with My Immortal, which can also be difficult to get through, but in a different way.

The Immortal provides examples of: