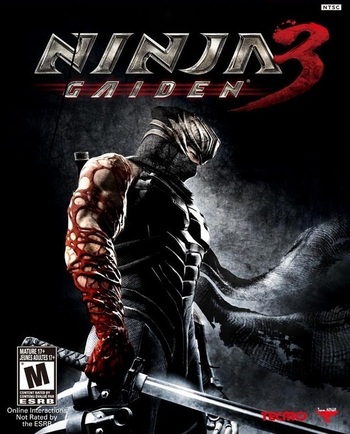 Ninja Gaiden III is a Stylish Action Hack and Slash game originally released in March 2012 for both the PlayStation 3 and Xbox 360.

Set after Ninja Gaiden II (2008), Ryu receives a request from the Japanese government, after terrorists take the British Prime Minister hostage, demanding his appearance. Travelling to London, he meets the enigmatic "Regent of the Mask", who places a curse on Ryu's right arm, making him feel the pain and hatred of the people he killed, while sealing the Dragon Sword within his body. With the "Grip of Death" slowly consuming his body, Ryu has to defeat the Regent and his "Lords of Alchemy" before they remake the world within seven days.

Ninja Gaiden III marks the return of scriptwriter Masato Kato to the series, who brought back story elements of the NES trilogy following their absence in the prior modern games. The game also featured competitive multiplayer, a first for the series.

In 2012, the game received an Updated Re-release for the Wii U (January 2013 in Europe), subtitled Razor's Edge. This version added traditional dismemberments, increased difficulty, additional weapons and upgrades, and additional playable characters (Momiji, Ayane and Kasumi). Ports for the PS3 and Xbox 360 were released in April 2013, which include all the downloadable content from the Wii U version already on the disc. Razor's Edge also is included in the Ninja Gaiden Master Collection for PlayStation 4, Xbox One, Xbox Series X|S, Nintendo Switch, and PC.