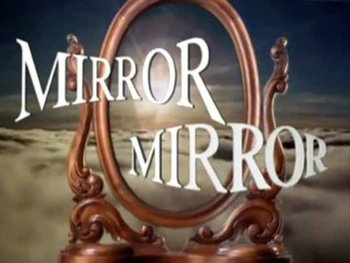 Far far away, on the edge of the world, you are lost out of place, out of time...
"That's one of the great curiosities of history, isn't it? How events can be seemingly unrelated to one another and yet be somehow linked, parts of a greater scheme. A series of events, all flowing on streams into a river, converging towards one single and inevitable moment... somewhere in the future."
— The Old Man.
Advertisement:

Mirror, Mirror is a 1995 Australian/NZ co-production about two families from 1919 and 1995 respectively after they find out that they can access each other's timelines through an antique mirror.

The 1995 side involves Australian Jo Tiegan (Petra Yared note  credited as "Petra Jared" ), whose mother has just been appointed principal of a New Zealand school and has dragged the entire family with her. On a trip to the local shop, Jo finds herself inexplicably drawn to an antiques store run by a strange old man who knows her name, and insists that not only does she take an old mirror he owns, but also that he personally places it.

Jo soon discovers why this was necessary: the mirror functions as a portal to the year 1919, when the place was owned by the Iredale family, whose neighbour Sir Ivor Creevey-Thorne is housing a young Russian named Nicholas.

Meanwhile, in 1995, a dig at the school leads to the discovery of a canister of toxic chemicals in a well, which is then accidentally sprayed on two students. With both students' lives hanging in the balance, Jo and her newfound friend Louisa race against time to prevent this from ever having happened.

For the famous Star Trek episode of the same name, go here.

Not to be confused with Gregory Maguire's Darker and Edgier literary remake of Snow White of the same title, or with the 2012 film of the same name.