Series / Master Ninja
aka: The Master 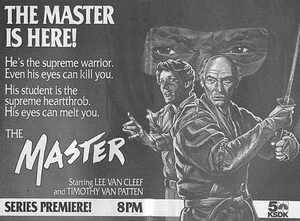 "Hi, I'm Max Keller."
— Start of each episode's Opening Narration
"I can get mean and nasty, but my friend behind you... You know, the one dressed in black with the samurai sword? You know how these ninjas are, always going around beheading each other. Barbaric, I know, but to them it's some kind of ritual. Know what I mean?"
— Max Keller, Perp Sweating a corrupt sheriff.
Advertisement:

The Master was a short-lived action-adventure series that aired on NBC in 1984 (one season of 13 episodes), starring Lee Van Cleef, Timothy Van Patten, and martial artist/actor Sho Kosugi, taking advantage of the Ninja fad of The '80s. The series was repackaged as the Master Ninja movies for release on VHS by Film Ventures International (who created their own opening and closing credits on the cheap).

Max Keller (Van Patten) is a drifter with a Cool Van and a hamster, who drives from town to town, taking odd jobs and getting in trouble when his Chronic Hero Syndrome kicks in. One day he tries to assist an old man at ground zero of an impending bar fight; Max is soon defeated, but he's amazed when he sees the old man systematically demolishing the bar and everyone in it. As Max helps the old man escape, he learns his story.

John Peter McAllister (Van Cleef) was a World War II veteran who stayed in Japan after the end of the war — you know, to enjoy the peace of postwar Japan (!) — and managed to join a ninja clan, learning their secrets and becoming "the first occidental ninja". He returned to the United States because he learned about a daughter he never knew he had; the airport at the town where he met Max was where the only photo of his daughter was taken. Unfortunately for him, his clan didn't approve of him deciding to retire, and his former apprentice, Okasa (Kosugi) is trying to find and assassinate McAllister.

Max asks McAllister to accept him as a student; the old man is skeptical but eventually agrees to at least teach the youngster enough to keep from getting himself killed. They team up to stop a Corrupt Corporate Executive and a Dirty Cop from destroying Demi Moore's airport and begin journeying together following the trail of McAllister's daughter, fending off Okasa and righting wrongs in each Adventure Town they find on the way.

Mystery Science Theater 3000 aired the first four episodes in the series in 1992, which became some of the most-loved episodes of the series. For information on those episodes and associated tropes, please see the following recap pages:

The Master contained the following tropes: