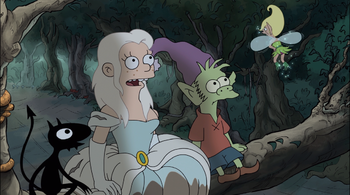 Our "heroes".
"And so, the demonic binding begins."
—The Enchantress

Today is a great day for Dreamland! The princess Tiabeanie is getting married to Prince Guysbert of Bentwood, thus forging an alliance between both kingdoms. However, when Tiabeanie's lady-in-waiting, Bunty, goes to wake her up, she's missing from her bed.

Turns out that Tiabeanie, or "Bean", is a girl who likes to leave the castle to go to the local taverns, get drunk and play cards for money - and this day is no different, starting a fight with the guy she was playing against before being caught by her father's Prime Minister, Odval, and brought back to the Royal Palace. As she is readied for the wedding under the orders of her father, King Zøg, Bean wonders if there's a place where everybody's happy.

Cut to Elfwood, a land where elves live and sing jolly songs while they make candy - with the exception of Elfo, an elf that is wholly bored with a life that is constantly happy and wants to be able to feel other things.

While checking on the presents the guests have brought, Bean finds a strange box that moves around while she's not looking, and a voice entices her to open it. When she does, a small black demon called Luci appears, appointing herself her own personal demon, in charge of drowning out her conscience.

Elsewhere, two mysterious figures (Cloyd and the Enchantress) look on Bean and Luci through a magical fire, stating that she's given the first step towards something sinister happening.

In Elfwood, Elfo and Kissy, a female elf he likes, are smooching in her bed when Kissy's father, the Elf King, catches them on the act, and sentences Elfo to death by hanging.

Bean attempts to get rid of Luci, but is unable to as it recovers from all punishment and can teleport himself, so she resigns herself to having him there.

Elfo's hanging's not going so well: Elves are too light to hang,so the king tells a soldier to stab him. Kissy cuts the ropes off, and Elfo and Kissy escape towards a gate that leads to the outside world. The king offers Elfo to forgive and forget if he will abide by the Jolly Code, but Elfo decides to leave, abandoning his homeland with no seeming chance to return. As he gives his first steps in the strange world, an eagle suddenly grabs Elfo.

At Luci's suggestion, Bean plays a prank on her father by rearranging the letters in the wedding cake.

Elfo decides to speak with the eagle at large about candies, until it decides to drop him in the middle of a clearing, right as a battle between small gnomes and large trolls takes place, with Elfo in the middle as both armies brutally massacre each other. Elfo grabs a few things and accidentally leaves the only surviving troll completely blind.

Queen Oona, Bean's stepmother, tries to have The Talk with her, but Bean's not really keen on having it with her - nevermind that Oona is from a different species.

Elfo continues to walk, when he gets hungry, and luckily for him, a humble couple of farmers invites him to have lunch. Elfo, unused to the new flavors, declares the food they give him to be wonderful, angering the couple - who are apparently too humble to accept any kind of praise, and kick Elfo out.

Now at the church - of the very new religion of Dreamland - Bean complains to Luci that, in the day of her wedding, she was supposed to be surrounded by people she likes, but she doesn't have anyone - not even her mother, Queen Dagmar. Luci shares a bottle of (ceremonial) wine with her, and the two get drunk, right on time for her father to arrive and drag her into the ceremony.

Elfo arrives to Dreamland, first thinking it is small, until he realizes that he is far away.

The wedding begins, and Guysbert accepts to marry Bean, but Bean rejects him and slaps the wedding ring away, which rolls close to a throne made of swords. Guysbert leans to grab the ring and stabs his head into one of the swords - but somehow he's still alive. King Zøg and Guysbert's parents rapidly agree to marry Bean to Guysbert's brother, Merkimer to salvage the alliance. Bean complains about being forced to marry, but Zøg doesn't care. Before Merkimer and Bean can be pronounced man and wife, Elfo opens the church's door and greets everyone, much to their surprise - elves haven't been seen in centuries, and their blood is said to have magical properties.

The King offers a gold coin for whoever brings him Elfo, and chaos ensues as people pile up to grab the elf. Bean takes advantage of this to escape through a window, and Elfo joins her and Luci as they run away.

Cloyd and the Enchantress look gladly as the wedding is ruined, but Cloyd points out that Elfo could be a complication - and gets burned.

Merkimer decides to find Bean and bring her back for the wedding, and Zøg sends three of his knights with him, Pendergast, Turbish and Mertz. Bean, Elfo and Luci run away across Dreamland, with Bean grabbing the other two to make their escape at a faster pace, and Luci uses some of his magic to scare off Merkimer and the knights, allowing them to leave town on a cart - which they have to abandon when it's set on fire, by jumping down a slope.

The trio enters an enchanted forest, where they bamboozle Merkimer by jumping up a tree. The trio meets an old fairy, who says she doesn't do wishes, but points them in the direction of the Wishmaster. Bean, Elfo and Luci walk in the direction until it gets too dark, and they settle down for the night, sharing their personal wishes before falling asleep - along with King Zøg, Queen Oona, Cloyd and the Enchantress.

The following morning, Bean wakes up to find they had already reached the Wishmaster's palace - or, rather, a hand-cranked elevator that reaches up to the palace. When they reach the top, though, it turns out that it is the palace of the Washmaster, who cleans clothes. Merkimer and the knights arrive just then, and Bean sneaks out before they can catch her, but when she reaches the elevator out comes the troll Elfo blinded, having followed him with his scent. With no escape, Bean decides to accept that marriage to a prince is her destiny, but Elfo tells her that destiny is what one makes of the future.

When Merkimer asks for her hand in marriage, Bean decides to jump off the cliff - only to learn that neither Luci nor Elfo have magic that can be used to fly, and they scream as they fall.