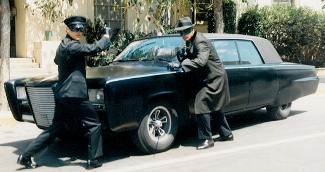 American Proto-Superhero franchise in several forms of media. Originally a radio show, adapted into two movie serials, a number of comic books, a 1960s TV adaptation (probably the most famous version of the property, responsible for launching the Western acting career of martial arts legend Bruce Lee), and a 2011 movie adaptation.

Furthermore, a new film remake for the property was announced to be in development in April 2020 with the current title of Green Hornet and Kato.

This page concentrates on the radio series, comic books, and TV adaptation.

The Green Hornet radio series was created by George W. Trendle and Fran Striker of Detroit radio station WXYZ, and premiered on January 31, 1936. It was a very long running series, ending on December 5, 1952, having run nationwide on the Mutual Broadcasting System, the NBC Blue Network, and its successors "The Blue Network" and the American Broadcasting Company (ABC).

Trendle and Striker, who had earlier created the character of The Lone Ranger for a western themed radio series on WXYZ, connected the two shows by making the protagonist of The Green Hornet, newspaper publisher Britt Reid, the grand nephew of John Reid, the lone survivor of an outlaw ambush of a squad of Texas Rangers, who became The Lone Ranger. While hinted at in earlier episodes, the blood relationship between the Hornet and the Ranger was explicitly stated in the Green Hornet episode "Too Hot to Handle" (first airdate, November 11, 1947), but never significantly used after that. Trendle's sale of the rights to the Lone Ranger property to Jack Wrather in 1954 made it impossible for later adaptations of The Green Hornet to make explicit reference to the relationship (although the 1990s NOW Comics comic book adaptation featured a veiled reference to the relationship, in the form of a painting, apparently of the Lone Ranger, which appeared in Britt Reid's living room); more recently, Dynamite Comics created a crossover comics series involving both characters.

The radio series introduced the most prominent characters, equipment, and plot devices featured in later adaptations:

Characters specific to the radio series and rarely used in other adaptations include:

The radio series was popular enough to spawn two film serials, The Green Hornet (1940) and The Green Hornet Strikes Again (1941). The serials are noteworthy in that Kato's nationality was changed once again (this time to Korean), and Kato was played by Keye Luke ("Number 1 Son" in the Charlie Chan film series, and much later, "Master Po" in the Kung Fu TV series). The serials have had two home video releases; on VHS in the 1990s and recently on DVD.

In 1966 producer William Dozier, wielding some clout owing to his smash hit series Batman, brought an adaption of The Green Hornet to the small screen as a Dramatic Half-Hour series. Van Williams starred as Britt Reid/The Green Hornet (who, in a modernization of the radio property, is not only publisher of the Daily Sentinel, but is also owner/general manager of an associated television station; Gary Owens, the iconic "Announcer" on Rowan and Martin's Laugh-In, occasionally appeared as a news anchorman on Reid's station). The show is best known for introducing martial arts legend Bruce Lee, playing Kato, to Western audiences. Lee's portrayal became so popular in Hong Kong (his Chinese home town) that the show was retitled The Kato Show when broadcast there. Because Lee himself was a martial artist, his Kato demonstrated those skills in the show (although the radio series made isolated references to Kato's ju-jitsu expertise, martial arts skills had never been an important part of Kato's characterization in either the radio series or film serials), and this development has had a huge influence on later Green Hornet adaptations: rumors of various proposed film adaptations have universally had a martial arts star being cast in the role of Kato, and it is now probably unthinkable for Kato not to be a martial arts master in any subsequent Green Hornet adaptation in any medium.

As for the supporting cast, Lenore "Casey" Case and Mike Axford were brought over from the radio series to comprise the regularly appearing Daily Sentinel staff. In the TV series Case knew Reid's secret identity (as in later years of the radio serial), while Axford lost his former policeman/bodyguard back story, and simply functioned as the Sentinel's regular police reporter. Because Dozier's Batman series already featured a police commissioner as a supporting character, District Attorney Frank P. Scanlon replaced the radio series's Police Commissioner Higgins as the Hornet's confidante within the law enforcement community.

The TV series also changed some of the Hornet's equipment. The most extensive changes were made to the Black Beauty, which had many more features and gimmicks than the vehicle did in the radio series. Some of the features of the television Black Beauty were "infra-green" headlights for stealthy night driving (supposedly, the headlights used "polarized light" which, in conjunction with polarized vision filters would provide as much illumination as conventional headlights while remaining very dim to anyone viewing without such filters), a sleep gas sprayer, rockets, mortars, and an aerial surveillance device called "the scanner". In the TV series the Green Hornet carried a gas gun (as in the radio series), while television added an electronic weapon referred to as "the Hornet sting", which the Green Hornet used to open locked doors and containers and to disarm assailants (typically, it caused an explosion in a lock, allowing the door or container to be opened, or in the breech of a firearm, which caused the person holding it to throw it down violently). Also, in this version Kato was armed with green colored, abstractly "hornet shaped" throwing darts which he used against armed assailants too far for him to engage directly with his martial arts skills (usually, the pain inflicted by the dart distracted the assailant long enough for Kato to reach him and render him harmless). In one episode ("Seek, Stalk, and Destroy") Kato uses a "tear gas dart", which he throws into the open viewport of a stolen tank in order to force the tank thieves out of the tank and into the open.

The terms under which executive producer William Dozier acquired the rights to The Green Hornet gave radio series creator George W. Trendle (hired by Dozier's Greenway Productions as a consultant) quite a bit of control over the series, up to and including approval of series scripts. Trendle was wedded to the idea of doing the series as a straight adaptation of the radio series, whereas Dozier wanted to modernize the setting of the series while introducing camp elements similar to those used in Dozier's then-current hit series Batman. Trendle agreed to modernizing the series but held firm on playing the adaptation straight, resisting the incorporation of camp elements. Dozier chafed under Trendle's contractual rights to approve or disapprove, and the conflict between the two added to the normal difficulties of producing and broadcasting a television series.

The Green Hornet premiered on ABC on September 9, 1966. The series garnered respectable ratings when it premiered, winning its time slot against competition from The Wild Wild West (CBS) and Tarzan (NBC), but after several weeks ratings began to slip. The failure of the series to maintain its initial high ratings exacerbated the conflicts between Trendle and Dozier which first became manifest during initial production. As ratings slipped, it became clear that ABC had little interest in giving the series a second season (in fact, Dozier was concerned that the network wouldn't even run the series during the summer re-run period). In a valiant attempt to save the series, Dozier presented network executives with a proposal to convert the series from a Dramatic Half-Hour to a Dramatic Hour Long, and featured the Hornet and Kato in an Intercontinuity Crossover in two episodes of his still popular Batman series hoping to generate interest in The Green Hornet among Batman fans. While ABC did eventually order summer re-runs of the series, it did not order a second season, and the series ended its run.

The continuing conflict between Trendle and Dozier (a true case of "Creative Differences") added to the normal difficulties in making the series, and after it was clear that the series would not be renewed Dozier blamed Trendle's veto power over series scripts and his right to approve or disapprove Dozier's plans for the series for its ultimate failure. Owing to the popularity of Bruce Lee, however, the series has become a Cult Classic, and has managed showings in syndication, notably on the FX and AmericanLife networks. A 13-hour marathon of the series aired on Syfy on January 11, 2011 to promote the Movie adaption opening that month. 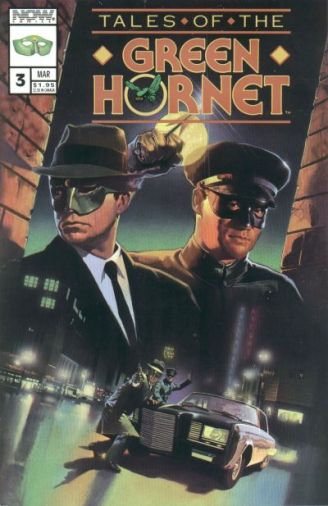 Tales of the Green Hornet #3

By far the most extensive and ambitious Green Hornet comic book adaptation was the 1989-93 series of several Green Hornet "unlimited" and limited-run series published by NOW Comics. NOW's project was especially ambitious in that it attempted to reconcile the various radio, film serial, and TV series versions of the Green Hornet character, creating what is in effect a multi-generational epic which spins the Green Hornet as being effectively the Reid family business. NOW's "Hornetverse" posited that the Green Hornet of the radio series was the original Britt Reid, grand-nephew of John "The Lone Ranger" Reid (however, legal considerations prevented NOW from making that relationship explicit), in partnership with "his" Kato, who was given the full name of "Ikano Kato". According to the series this Kato was Japanese, however during the war the Reid family publicly held Kato out as being Filipino in order to prevent his being sent to an internment camp.

The Green Hornet of the TV series was posited to be the namesake nephew of the original Hornet (usually referred to as "Britt Reid II" whenever the genealogical question was raised), who took up the mantle of the Green Hornet in partnership with "his" Kato, Hayashi Kato, who was the son of Ikano. This Britt Reid retired after suffering a heart attack, but he encouraged his nephews Alan (killed by a bomb on his first "mission" as the new Green Hornet) and Paul (a concert pianist by training) to take up the family business.

Alan Reid was killed in his first mission as the Green Hornet (causing Hayashi Kato to go into a tailspin of guilt and to begin hitting the bottle hard); shortly thereafter his brother Paul took up the role, joined by Hayashi Kato's half-sister Mishi, an automobile designer by profession and a martial artist (of course!) by avocation. Unfortunately, the company controlling the rights to the Green Hornet property did not approve of this, and demanded that Mishi Kato be removed and that the Paul Reid Hornet be paired with Hayashi Kato. Fearing the loss of their license to use the characters, NOW Comics acceded to that demand. Apparently, the rightsholders relented in their objection to the Mishi Kato character, as she made an appearance in a later series of comics, and served as a Love Interest to Paul Reid in later comics. Rounding out the Reid family saga is Diana Reid, daughter of the original Britt Reid and cousin to Britt II and Paul. Diana, a lawyer, ran for and won election to the office of District Attorney upon the retirement of Frank Scanlon, and maintains the Hornet's covert connection with the law enforcement community. She developed a romantic relationship with Hayashi Kato, and they had become engaged by the comic's end.

2010 saw the start of a number of Green Hornet comics under the aegis of Dynamite Entertainment. A couple series are noteworthy: Green Hornet: Year One by Matt Wagner (writer) and Aaron Campbell (art), and several series by Kevin Smith (especially Kevin Smith's Green Hornet, reputed to be based on Smith's aborted script for the Green Hornet film eventually produced by Seth Rogen, and separate series on Kato and Kato's origins).