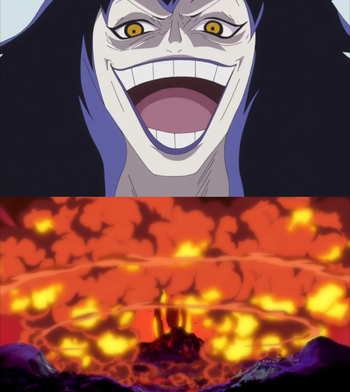 "I've killed the whole island."
"I told you the time limit was an hour...but that's just when the cage closes completely. There are injured people out there, and elderly folk who can't stand. Suckling little infants as well! Who will be the first to die? Within 30 minutes people will be sure to start dying somewhere! And within 40...we will be able to hear their screams from here! Within 50...this country will be stained red as a crushed tomato with their blood! And in an hour...no voices will be left to cry out!"
—Donquixote Doflamingo, planning to kill everyone in Dressrosa

While many of the baddies from One Piece range from mere insensitive jerks to all-out line-crossing assholes, there are a few villains who put all others to shame. Characters are listed by the arcs where they have the most impact; they may have appeared earlier or appear later.