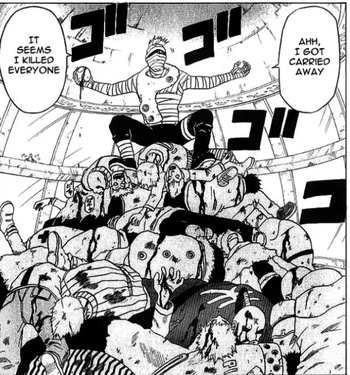 "The people of my village called me a monster... That's why I decided to become a real monster!"
"He's the O.P.T. from Zenom who's attacking people of the city. Rumors said that he killed over hundreds of people. He even kills guys from Zenom if they get on his bad side. I heard that those who killed can't lay a finger on him. A magician who covers everything in blood."
—Ball, to Jio Freed, about Wise Yuri (aka the "Crimson Magician"), Chapter 8

While 666 Satan (retitled O-Parts Hunter in the United States) is a rather idealistic manga, Jio Freed and his companions have encountered many enemies, ranging from human criminals to angels and demons. Here are the worst of the worst.

After Satan, entries are more or less in chronological order.