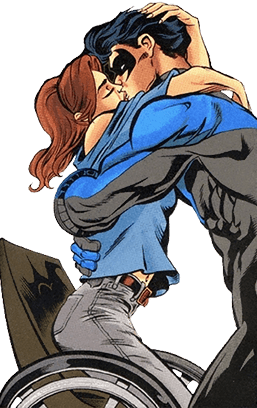 The one on the left.
Advertisement:

Your studly, womanizing main man is walking down the school hall, and eyes a gorgeous woman he's never seen before. When he tries to start putting his moves on her, he finds out something.

Or deaf, or has a prosthetic leg, or something like that. But don't worry, she'll still probably fall for him anyways.

The Disabled Love Interest is a (usually temporary) Love Interest, most often Inspirationally Disadvantaged. She'll overcome her challenges in the end, and have a steamy kiss while she's at it. Homework question: Why is she usually only temporary? Unfortunate Implications indeed.

Still, Tropes Are Tools. The love interest doesn't have to be Inspirationally Disadvantaged and can be a normal person with human thoughts and feelings, with Character Development.

See Also: Blind and the Beast, Ill Girl, Handicapped Badass, and Florence Nightingale Effect. A downplayed version of the trope is a Speech-Impeded Love Interest.