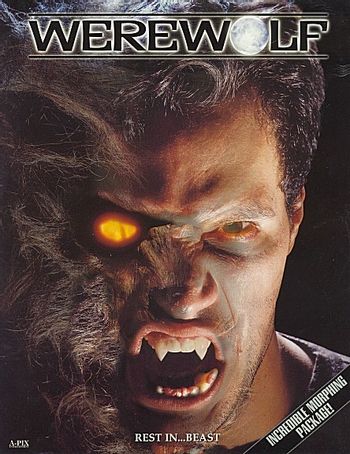 The DVD cover, which looks more impressive than the actual movie.
"I don't know, you had it last!"
— Tom Servo responds to the title
Advertisement:

Werewolf, also known as Arizona Werewolf, is a 1996 direct-to-video horror film probably best known for being a magnet for mockery (more on that below) and its low production values.

Archaeologists working in Arizona find a werewolf skeleton. In this film, werewolves are part of American Indian mythology, which the head archaeologist Noel (Richard Lynch) calls a skin-walker

or yee naaldlooshii (which somehow gets pronounced "yottaglanchi"). And apparently werewolves take on habits such as "sleeping nose to anus". note "What? It's fun!"

The first ten minutes or so of the film shows one of the crew getting scratched by the skeleton and eventually turning into a werewolf who is quickly put down by other members of the crew (including one played by Joe Estevez). However, the ill-tempered foreman of the dig site, Yuri (played by Jorge Rivero), took some of his blood and soon becomes fascinated with the idea of creating a "man-made" werewolf. Soon after the first werewolf gets put down, a writer named Paul Niles (Federico Cavalli) moves into a house in suburban Flagstaff and becomes close to another of the archaeologists, Natalie Burke (Adrianna Miles). As the two make nice at a party, Yuri makes his first attempt at werewolf creation via an ill-fated security guard (played by the film's director, Tony Zarindast), who promptly crashes his car mid-transformation and dies. However, Yuri's growing dislike for Paul turns into an opportunity when the two men fight at the lab where the werewolf skeleton is housed and Yuri stabs Paul with the skull. Soon, Paul finds himself becoming a werewolf at night and menacing the entire town. Events come to a head when he's finally revealed to both Natalie and Yuri, as the former has fallen in love with him, while the latter just wants to cage him up and make money off of him.

The movie remained mostly obscure until it became the feature of a 1998 episode of Mystery Science Theater 3000. Werewolf was noteworthy for having been released only two years previous to the MST3K episode mocking it, making it the most recent film the series tackled,note Future War is sometimes considered for the spot as it was filmed in 1994 but not released until 1999, though they've since both been beaten by 2013's Atlantic Rim as well as one of the only films they riffed that was created during the run of the show itself. Mike Nelson and his robot friends made considerable light of the clumsy direction of the film, the relatively cheap, inconsistent nature of the werewolf costumes, Adrianna Miles' bad English and her constant pronunciation of the word werewolf as wuhr-welf, about the full moon occurring every single night in the movie, the fact that Yuri has a different hairstyle in almost every scene, the fact that the security guard drove past the same location several times while a werewolf, and the fact that almost all the cast – despite playing Americans – spoke with various thick accents, saying such phrases as "you and Noel is in it for fame and fortune? But over my dead body!" Because of the numerous ripe opportunities for riffing, Kevin Murphy, who played Tom Servo, referred to the film as "a gift from God". Mike and the Bots also sing various songs to the film's closing credit music, in the style of Fleetwood Mac's "Tusk".

Bizarrely similar to Track of the Moon Beast and It Lives by Night, both of which were featured in MST3K's tenth and final season. Hell, Moon Beast is even about a guy named Paul in the southwestern United States being turned into a monster in a manner that ties into Native American folklore while his ditzy ladyfriend does pretty much nothing relevant to the plot. Both movies also feature supporting characters making perplexing references to Dracula.

Not to be confused with the card game or the 1987 TV series of the same name.

See the rundown of the Mystery Science Theater 3000 episode here.