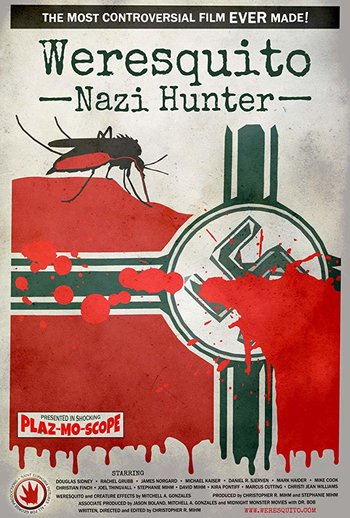 Weresquito: Nazi Hunter is the eleventh film by Christopher R. Mihm and the eleventh film in the Mihmiverse Shared Universe. The film largely stands apart from the rest of the Mihmiverse, being much darker in tone than Mihm's earlier films and mostly taking place in the town of New Berlin, Wisconsin. Nevertheless, it is set in the same universe, through a surprising connection that is only revealed at the end of the picture.

The movie centers upon Cpl. John Baker - an American soldier and prisoner of war, who was held captive and experimented on by the Nazis during World War II. The experiments changed Cpl. Baker so that whenever he sees blood, he transforms into a half-man/half-mosquito hybrid and is compelled to feed. Now, he uses his newfound power to hunt down those responsible for his condition as well as any other evil-doers who get in his way.

As the movie opens, Cpl. Baker has come to New Berlin, Wisconsin in search of Dr. Schramm - the Mad Scientist who made him into a monster. He befriends a woman named Leisl, who runs the local diner, and steps in when her ex-boyfriend Eric tries to force his way back into her life. The promise of romance fills the air, but can Leisl love the man within the beast?