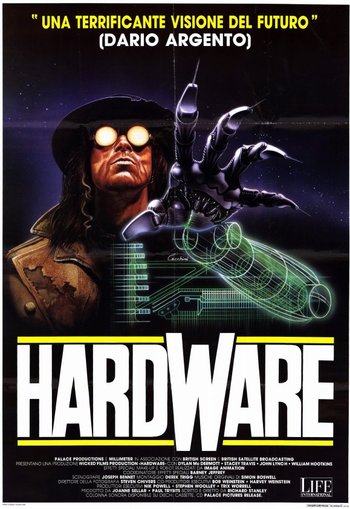 No flesh shall be spared.
Advertisement:

Hardware is a British Sci-Fi Horror movie directed by Richard Stanley. In a post-apocalyptic desert, a wandering scavenger finds a dismembered robot buried in the sand, and takes the pieces back to the City to sell to Alvy, a scrap dealer. Also visiting the dealer are Moses "Hard Mo" Baxter (Dylan McDermott) and his Sidekick Shades. Mo is a (slightly) more professional scavenger; Shades...wears shades.Mo buys the most of the robot bits as a Christmas present for his girlfriend Jill who is a sculptor.

Jill lives in a tightly controlled apartment block in the dangerous inner City, and has been having trouble with a prowler, but is persuaded to let Mo in and he gives her the bag full of robot. Alvy, meanwhile, has been examining the remaining robot parts more closely and has made an alarming discovery. The robot is actually a M.A.R.K. 13 cyborg, a lethal prototype killing machine capable of rebuilding itself if damaged. He contacts Mo, and in a truly outstanding example of Plot-Induced Stupidity persuades Mo to come to the scrap yard - leaving Jill at home with the M.A.R.K. 13.

The robot accordingly rebuilds itself, using household appliances and sculpting tools to replace missing parts, and runs amuck. The bits left with Alvy also come to life, and Alvy is killed by lethal injection from a disembodied crawling claw. Mo, having found Alvy dead and realised the danger, rushes back to rescue Jill. Then things get seriously weird.

Shot on a very low budget, Hardware has become a definite Cult Classic, at least in the U.K. The story was based on "Shok!", a short comic strip set in the Judge Dredd universenote Apparently, the filmmakers did this without even bothering to talk to 2000 A.D. comics about the intellectual property rights, figuring all they had to do was change the main characters' names. This led to significant legal trouble for them later down the line., and the setting is generally acknowledged to be a far better depiction of a Mega-City than that seen in the 1995 film.

No examples shall be spared: