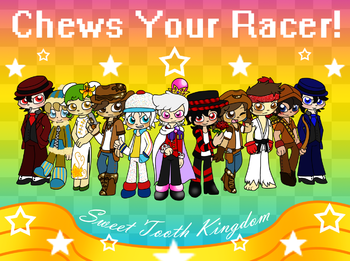 is a Wreck-It Ralph fanfiction that, while set in the same exact universe, focuses on the Sugar Rush racers rather than the eponymous wrecker.

and set some time after the events of the film, the story focuses on the lives of the racers from the fictional game Sugar Rush, in which we're shown what they do from time to time when the game isn't in use. That is, until a new set of racers show up. Following an unexpected update which leads to the creation of a new portion of Sugar Rush called the Sweet Tooth kingdom, Vanellope and her friends find themselves racing for their lives when Vanellope accepts a bet by Prince Garry Gumball, the ruler of the said kingdom. The prize at stake: Vanellope's hand in marriage. They now must face off against the racers of the new kingdom in a ten-against-ten Grand Prix race using double dash karts (basically karts that allow two people).

At the same time, the racers also have to worry about their love lives. When a certain pumpkin headed boy starts pranking Vanellope one too many times, everybody else begins to suspect that they might be crushing on each other (despite the both of them constantly denying the mere thought of it). It only gets worse when the aforementioned bet that'll see Vanellope getting married to Garry gets placed, leading everybody to worry not just for her but for the entire game.

The story was followed by several slice-of-life fanfics, all of which focus on the lives of Sweet Tooth racers after the events of the story, along with an incomplete sequel titled Sugar Rush: Return of A King.

Spoilers related to the original Wreck-It Ralph movie will be UNMARKED so read at your own risk.