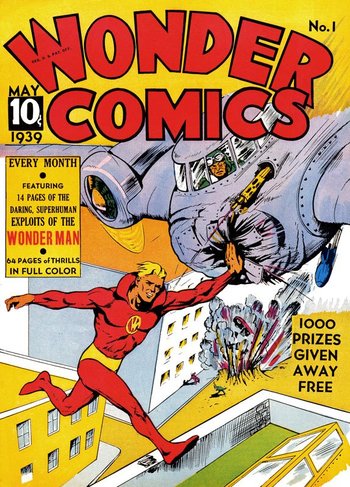 Wonder Man is a comic book made by Will Eisner in 1939 for Fox Comics, the comic book subsidiary of Fox Features Syndicate, under his Eisner & Iger company, as part of The Golden Age of Comic Books. It appeared for first time in a then new comic book magazine called Wonder Comics and since Issue no.3 changed to Wonderworld Comics, publication that lasted 30 issues. If well it was a 64-pages magazine, the main character was Wonder Man as can be seen in the cover, with a 14-page story. Here, Eisner signed as "Willies", being in charge of drawing and script.

The story is about Fred Carson, a timid radio engineer and inventor that travelled to Tibet where their monks gave a Power Ring that makes its carrier a kind of... superman, in exchange to use these powers for the good of humanity. Fred, disguised as "Wonder Man", has invulnerability to bullets, can leap travelling large distances, can move fast enough to catch bombs in mid-flight and enough power to throw them back with his bare hands, jumps high buildings and even has such great lungs to shout a crowd since the tallest part of a building. If this story sounds a lot like Superman to you, you're not wrong. And, obviously, DC Comics thought the same thing.

Eisner was commissioned by Fox Publications to, as he would later describe in court: "create another Superman" after the original became a sensation. Eisner's creation "Wonder Man" appeared for only one issue before DC caught wind of it. What would happen next was the first ever lawsuit over comic book copyrights in the history of the industry. Eisner refused to perjure himself and testified against Fox, costing his company a large contract (or so he said, court records found decades later say otherwise.). Soon afterwards, in 1939, Eisner was approached by a newspaper syndicate to create a comic book supplement for them. What would come about as a result was The Spirit.

Even when Eisner confessed this idea was born earlier than Superman, this publication came first (a year before, to be exact), and DC finally had the last word of it. The complete story about this lawsuit against Wonder Man can be read in one of Eisner's graphic novels: 1986's The Dreamer

, a kind of autobiography of his origins, in which Eisner refered to this lawsuit changing some names, but the story is almost the same. Or at least, his part of the story. Wonder Man became a famous One-Hit Wonder in the Golden Age and a kind of Pop Culture Urban Legend in comic book history.

The Other Wiki dedicated a complete article about Wonder Man here

. Also, the comic book was already scanned and uploaded to internet, can be read here

Of course don't be confused with the Marvel superhero of the same name and much less with a famous woman that isn't his counterpart.

Wonder Man and its publication provide examples of: