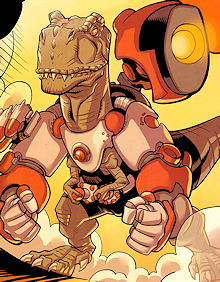 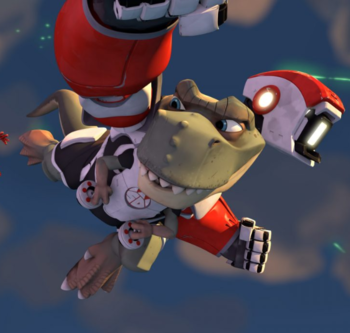 Super Dinosaur is an intelligent Tyrannosaurus rex who wears a harness that gives him functional arms and a lot of weapons. He hatched from an egg that Max Maximus stole from inner Earth. Maximus experimented on SD granting him exceptional intelligence and a small size (both relative to a normal T-Rex). SD became friends with the Dynamo family, especially Derek, and when the Dynamos learned about Maximus' evil plans SD sided with them against Maximus. SD acts like a human child of Derek's age. The two are best friends but as the only good dinosaur SD gets lonely. 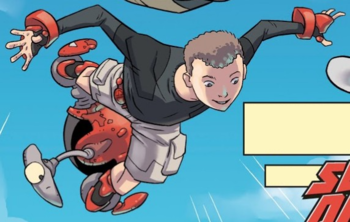 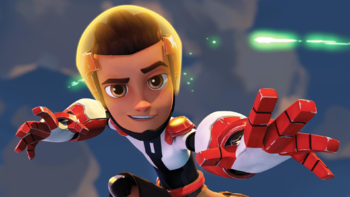 "I know what you're thinking: who the heck are these guys? I'm Derek Dynamo, son of Doctor Dynamo, and all around cool dude. Really, I'm pretty much awesome at everything."

Derek is the son of the brilliant Dr. Dexter Dynamo. He uses his smarts and an array of gadgets to fight alongside SD. Derek can be a Totally Awesome Insufferable Genius, but he is a hard worker and really cares for his friends and family. Presently he is neglecting his friendship with SD to spend time with Erin Kingston. 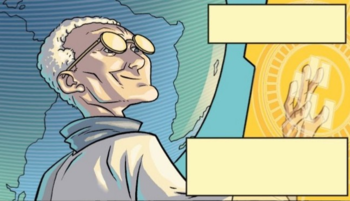 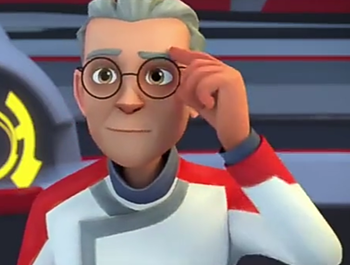 Sarah and Bruce Kingston are hired to help maintain Super Dinosaur's armor. They move with their daughters Erin and Erica into the Dynamo Dome. The parents are excellent mechanics and put together some specialized armors for SD. Erin is an excitable and fun girl who takes to her new Dynamo Dome life quickly. Erica is initially angry at being taken away from her friends, but grows to appreciate her new home. 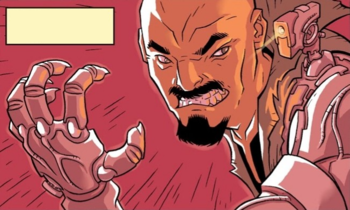 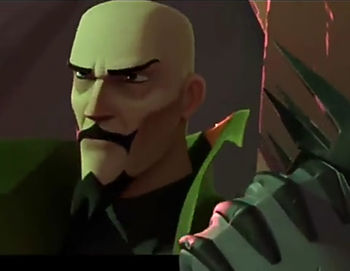 "Good work, my Dino-Men. And you... You had so much promise, young one. It's sad that you waste your time as a lackey for Earthcore. You could still join me."

Max Maximus is the former partner of Dr. Dynamo and one of the main villains of the series. He can seem Affably Evil at first glance because of how typically comic booky he is, but in issue five we see new depths to his villainy. His goal is to access Inner Earth and use the Dynore, or as he calls it: Maxinite, to create an army of dino people. And then naturally Take Over the World. Fortunately when he was incarcerated his mind was partially erased of Inner Earth, but he escaped and seeks to find a way back. 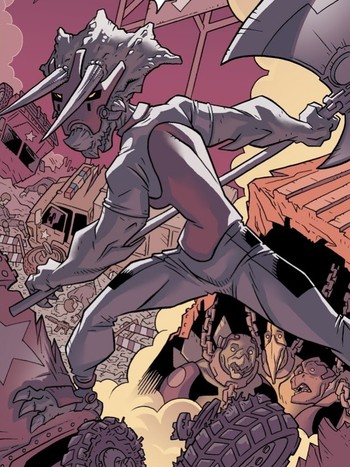 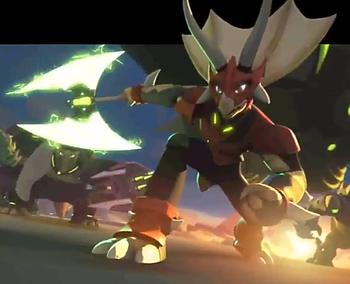 Tricerachops: I am freeing my people from the oppression of Max Maximus! You are an enemy of his—why do you oppose me?!
Derek: Because you're a bad guy?!
Tricerachops: Things are not that simple, child!

Formerly The Dragon to Max Maximus. She was tired of his treatment of her and the other Dino-Men so she bailed and joined The Exile. 'Chops is proud of her race and simply wants freedom from oppression. 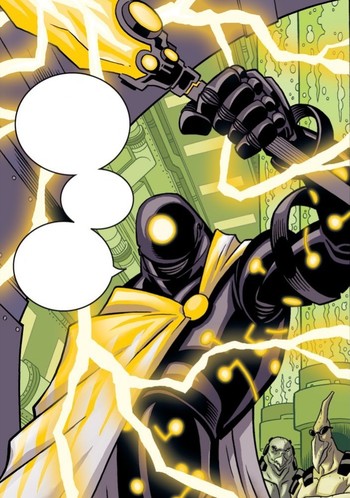 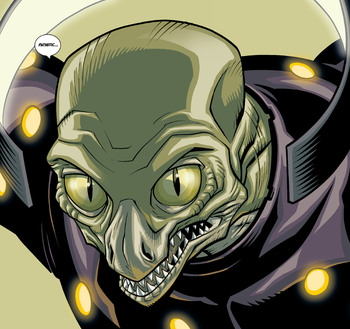 to see the Exile without his helmet.
"I am The Exile! Very soon the world will be in shambles, your kind will be hunted, exterminated. The time of humans is coming to an end. We are entering the age of the Dino-Men."

A mysterious figure who is fighting for a world ruled by Dino-Men. He is against the Super Dinosaur team as well as Maximus, and in fact rallied some of his Dino-Men to his cause, including Tricerachops. The Exile wields a staff with weaponized Dynore attached. In actuality he's a creature from Inner Earth called a Reptiloid. He is trying to free his people from his brother, Monarch Slinn, by taking over the surface world. 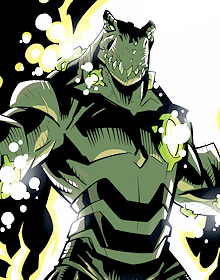 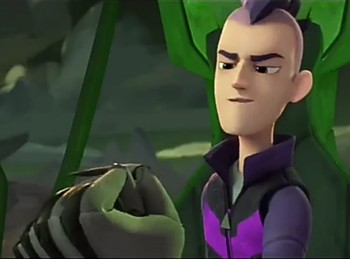 "Our leader is incarcerated, our forces are scattered... but fear not, Dino-Men... all is not lost. Maximus prepared for such events. You are all to follow my orders until his return. Allow me to— Oh, what? Do I look familiar?"
—Issue #7

A "failed" clone of Maximus. He was created using dino DNA to aid the cloning process, and as a result he slowly becomes more dino and less man. In Issue #18, when his transformation is completed, he renames himself to Tyrannosaurus X and cements himself as a new evil power for Derek and SD to contend with. And he is no joke.