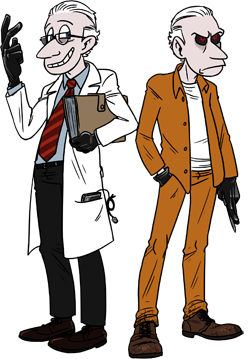 is a webcomic about the life of Dr. Herville Schtein, an abnormal scientist who descends into a life of supervillainy. Think if a Start of Darkness was the first book in a series that you read, and it starred someone who was a Jerkass Woobie scientist, and you've got the right idea.

Set in an alternate timeline in the 2057-2060s where the Cuban missile crisis was never averted, the world in String Theory is recovering from a major war which split the world between capitalist and communist superpowers—with the scale tipped a little in the USSR's favor.

Also, while String Theory is not R-rated, it nevertheless contains adult concepts and is written for adult sensibilities.

Not the same as the Danganronpa OC-insert fanfiction by the same name.