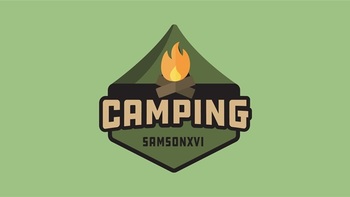 is a Roblox Survival Horror adventure game (did we just say "horror"?) entirely built and scripted by SamsonXVI. In Camping, players can go camp out in Specky Woods, explore the forest, tell stories by the campfire, and have a good time!
Advertisement:

By nightfall, when you and your friends are by the campfire, a strange black Humanoid Abomination suddenly ambushes the group and tries to murder them, but what is this Monster up to? A strange series of paranormal activity occurs over the next few days, if you survive at least.

Camping and its next entries in the series are notable for starting the 2019 trend of story games on Roblox, having a One-Word Title, simplistic vector logo, a seemingly innocent and casual premise, and of course, the sudden turn and twist for the paranormal macabre.

is the sequel of Camping. You and your friends have gone camping out in a national park known as Terra Park. Now guided by a well-trusted park ranger named Daniel, you should be safe this time, right? Well not when the Murderer suddenly attacks the campers sited at the Campground. Now what is this Murderer up to?

is the prequel of Camping. You and your friends, after driving in a car for a long time, decided to stay for a night at the Gloomo Hotel. At night, a blizzard hits the hotel and you guys will have to evacuate, when you come face to face with a different Monster.

is the prequel of Hotel. You and your friends, while living out in a neighborhood, have been invited by Jack Logan for dinner at his Luxurious Mansion. Having been through hard times, you hope your presence at the dinner party will cheer him up. Turns out, he hosted the party for a specific group of guests, and his intentions may be sinister...

is the third sequel to Camping. You and your friends go camping at Wicka Peak, being guided by Park Rangers Daniel and Steve. After an unfortunate event involving a murder at Terra Park, hopefully things should be easier, right?

The Camping series provides examples of: