Hello. My name is n3rd_dash. But you can just call me Dash. I found TV Tropes a while back when I was bored and have become addicted since. It's very nice to see so many people who are fans of the same shows I liked from my childhood and like to this day. This place has greatly helped me with writing, world building and such and has helped me get into plenty of shows I would not really care for otherwise. So, I'm thankful for it. I mainly spend most of my time in the Forum Games and occasionally talking about shows I like on other forums.

You can find my troper wall in the top left corner. The underscore in my name makes it difficult to link.

Tropes That Apply To Me

I have a fair amount of OCs that I use in role playing. I'd recommend checking them out, so you could get a better understanding of them. 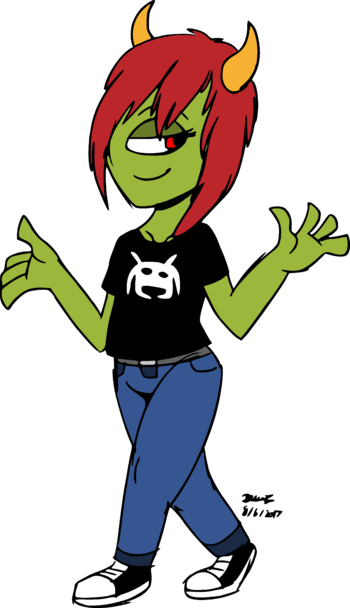 Elvira is probably the character I've spent the most time on. A resident of Hell, before eventually moving up to the surface world, Elvira is a demon with an obsession over human culture, being a big fan of video games, movies, tv shows, comic books and the like. She currently lives in a small suburban home, with her mother, Medusa. Not the Medusa, but a distant cousin from her that shares her name. Medusa adopted Elvira when it was revealed she was unable to get pregnant, and when his husband broke up with them for such reason. Despite this semi sad story, Elvira and Medusa have a good relationship, even if Medusa does often end up embarrassing Elvira in front of her friends. Elvira herself has a closet crush on Beezlebeth (Beth for short), Satan's biological daughter. They are relatively decent friends in general, but Elvira does personally see more of a connection to the two. She was able to find and book an apartment for her two human friends, who were considering moving into her hometown. 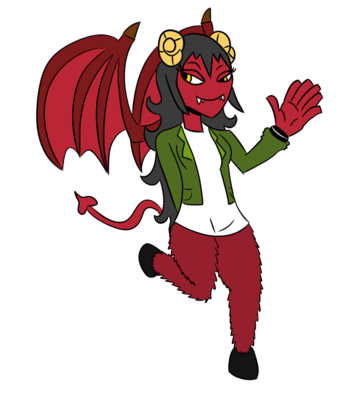 Whereas Elvira is a resident of Hell, Beth is a manager of Hell. Beth is basically in charge of management of the fiery pit below us we all know and love. She's in charge of plenty of various resources that make Hell what it is. However, ironically, with her management, Hell has become less of a...well, hell, and more of a small island surrounded by lava, with a large city, small suburban area and a high class prison for sinners to spend their eternal lives in, or be reformed as a demon for good behaviour, where they can roam around the city like others. She manages things like sins, construction, visitors and even hosts the weekly morning announcements. She happens to be very good friends with Elvira.