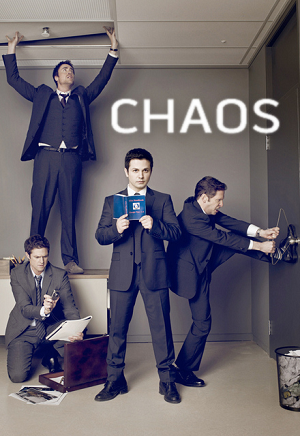 Higgins: Clandestine Administration and Oversight Services, or as we like to affectionately refer to it around here, CHAOS.
Advertisement:

Not to be confused with Order vs. Chaos.

CHAOS was a Dramedy which premiered on Friday, April 1st, 2011 on CBS, replacing The Defenders mid-season. It follows the adventures of Rick Martinez (Freddy Rodriguez), a news agent who aspires to join the CIA as a spy. However, Martinez discovers that the position he has applied for is no longer available, because the department offering it has been closed due to budget cuts. He is instead made an in-house mole for the ODS (Office of Disruptive Services).

The show makes use of an elite four-man team; featuring:

The show ended on July 16th, 2011, having aired only three episodes on CBS, the rest being aired by Netflix.