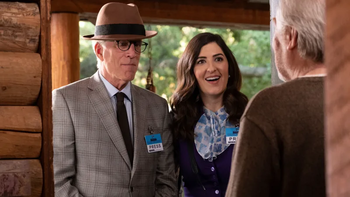 "My name is Michael Scoop. This is my photographer, Janet Scoop. She's my sister. We're the Scoops."
"See, if I make him happy, I get the points. That's how the system works, remember?"
—Doug

The Soul Squad has made it to Calgary, Canada. Michael and Janet pose as reporters and visit Doug Forcett, the one human in existence to most closely accurately figure out how the afterlife works (92% accurate, in fact; by contrast, most of the world's major religions got about 5 to 10% of it right) while he tripped out on magic mushrooms as a teenager, as Michael believes that the life Doug lives will be the perfect blueprint of how to inspire others to live a morally good life. However, it turns out that Doug's miraculously accurate vision of how the afterlife works has ruined his earthly life, turning him into an isolated hermit who makes his living off the land and has dedicated his whole life to making others happy to the detriment of his own well-being. He subsists solely on lentils, radishes and recycled water, lets a preteen boy bully him into doing his chores for him, volunteers himself as a test subject for cosmetics so they won't be tested on animals, has a minor meltdown when he accidentally calls Michael "Mark" and becomes utterly distraught when he steps on a snail, giving it a full-fledged funeral when he's unable to save its life. Even Janet describes Doug as a miserable wreck, a "happiness pump" who doles out good deeds to maximize others' joy at the cost of his own, and the way he lives is no way to live at all. Before Doug leaves to walk all the way to Edmonton to donate to a snail charity, Michael suggests that Doug relax once in a while, reasoning that he probably has enough points by now, but Doug refuses, as he's terrified of doing anything that could potentially ruin his chances of getting into the Good Place.

Meanwhile, the four humans are waiting in a bar. Chidi and Jason play "Jacksonville-style" pool while Eleanor seeks advice from Tahani for what to do about the things she discovered about her and Chidi's relationship during their time in the afterlife. However, the demons arrive in the bar, and Janet instigates a fight, with the group defeating the demons and sending them to the Judge's realm. They subdue Shawn and interrogate him. He isn't fazed, gloating that he expects to see not just the Soul Squad humans in the Bad Place, but also their friends and family members and even Doug. After they dispose of Shawn, Michael begins to wonder if the problem with the points system goes deeper than he originally suspected, and he intends to speak to the accountant in charge while the humans wait at Doug's house. However, more demons arrive, so Janet takes the four humans to her void instead, killing them on Earth.