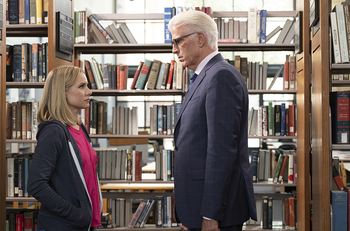 "This library's depressing."
"I didn't choose to fall in love with Chidi, because some all-knowing demon, you, brought us together and scripted our lives."
— Eleanor

Eleanor and Michael arrive at a public library in Arizona. Eleanor wants Michael to give her back her memories of being in love with Chidi. She needs to see for herself because she thought she was incapable of loving anyone. Michael hands her some earphones and connects her to a machine that will help her remember her time in the afterlife. However, he warns her the experience will be intense and it needs to be taken slowly, as the restoration process will have adverse physical side effects. Just simply recalling an innocuous encounter with Vicky and Bambadjan causes Eleanor's hair to burn off and her teeth to come loose (though she's back to normal after twenty minutes).

After she recovers, Michael shows her memories from Reboot #119. In this reboot, the humans were made to pick their spirit pets. Chidi had trouble picking between two puppies. Tahani chose a mirror centaur that takes on its owner's appearance, with the resulting centaur, T'Hania, being a more vain version of Tahani. Jason picked a penguin (which he didn't think were real). Chidi eventually decided to pick the black puppy but was too late to adopt it, forcing him to choose from the leftovers; he picked an owl. Eleanor got a pet iguana. When Chidi's new owl attacked him and scratched up his arm, she tells him to just ask Michael for a dog but Chidi was stubborn and said no. While Eleanor helped bandage his arm, she offered to talk to Michael for him.

Michael pulls the earphones out of Eleanor's ears. Eleanor is upset at the interruption but Michael tells her that the rest of the memories are boring. Eleanor suspects that Michael doesn't want her to see something. She takes the earphones back and demands that he show her more. Back in Eleanor's memories, she eventually asked Michael if it was possible for Chidi to swap his owl for a puppy. Michael was happy to grant the request but noted that Chidi may want to wait because they would be having a party at Tahani's that night where everyone would be able to transform into their pets for a few minutes.

Eleanor then lost her iguana and Chidi offered to help her look for it, eventually leading to them kissing. Michael tells Eleanor that they were inseparable after this. They later realized that they were actually in the Bad Place so they used Janet's train to escape to the Medium Place. Eleanor watches as her past self says "I love you" to Chidi and he says it back before pulling out the earphones. Michael says that that's the story and asks if they can go now. Eleanor asks how it ended and Michael says that it ended with him rebooting all of them. Eleanor asks him to show her how this happened.

Eleanor and Chidi returned to the Bad Place to confront Michael, asserting that no matter what he throws at them, their love will conquer all. Michael taunted them that their love isn't genuine because he orchestrated all of it to happen before snapping his fingers to reboot the experiment again. Eleanor removes the earphones and Michael apologizes for how cruel he was in the past, swearing that he's changed. Eleanor tells him that she isn't mad at him; she's just sad because for a moment, she thought she was capable of love, but in reality, Michael had manipulated her into falling in love with Chidi. She brushes it off and asks Michael if he wants to get some burgers. Michael asks her how she came to the conclusion that she's incapable of love when she just watched herself fall in love.

Eleanor invokes the philosophy of Determinism, which asserts people have no control over their actions, arguing that she didn't choose to fall in love with Chidi because Michael chose for her. Michael says that he didn't; he put them together to torture one another, not fall in love. Eleanor retorts that everything in her life has been determined by her upbringing, genetics, and environment; even in her afterlife, everything was determined by something else, in this case Michael. She comes to the conclusion that there is no such thing as free will. The library closes so they head to a diner called The Sandy Spoon. Michael tells her that he'll prove to her that she made a choice. He finds a memory from the very first attempt, showing her how she stood up and confessed to everyone that she didn't belong in the "Good Place". Michael explains that she chose to sacrifice herself in order to ease Chidi's pain. This wasn't him manipulating her; she ruined his whole plan, and she was constantly doing things he didn't anticipate, even though he knew everything about her as a person. He even complained to her about it once in Reboot #445.

Michael admits that he tried to script Eleanor's whole afterlife but she kept made choices that he never saw coming, illustrating that she does have free will. Eleanor still doesn't believe him and wonders if there are greater forces at work guiding their actions. Michael gets fed up with her and pours his glass of iced tea over her head. Eleanor is shocked and angrily asks why he did that and he says because he has free will and she was being annoying. He scolds her for refusing to consider that the feelings she had for Chidi were real and points out this is a classic defense mechanism of hers, as she hates being vulnerable. Michael caps it off by stating that he's going to use his free will to go pick up their friends from the airport.

The Soul Squad reunite and Eleanor apologizes to Michael, admitting that he was right about her stubborn refusal to accept that she had free will. He accepts her apology and apologizes for having poured iced tea on her head. Eleanor notes that she's realized that maybe they are the freest people in the galaxy because they actually know what happens in the afterlife, and this has gotten her to think that the Soul Squad needs to think on a bigger and bolder scale to reach more people. Michael agrees and tells the gang that they are going to Canada.

Meanwhile, Shawn has built an illegal doorway to Earth. He frees Vicky from her cocoon, sends her through the doorway and he, Val, and Glenn follow her through.