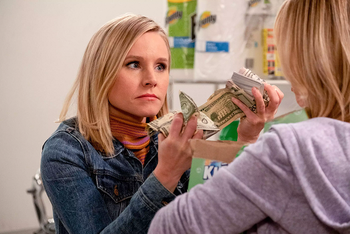 "I knew it! My mother is a con artist!"
"If Donna Shellstrop has truly changed, then that means she was always capable of change, but I just wasn't worth changing for."
— Eleanor

Eleanor and Michael have arrived in a Nevada suburb to track down Eleanor's mother Donna, who had faked her death and is now living under a new identity as Diana Tremaine. They find that she's remarried to a nice man named Dave, who has a daughter from a previous relationship named Patricia. Eleanor is not all happy that her mother faked her own death, stole her go-to fake alias, and got herself a new family. Michael has to keep Eleanor calm so that she doesn't blow things for them.

Meanwhile, in Budapest, Tahani tries to reconnect and repair her fractured relationship with Kamilah, with Chidi keeping watch to stop her from doing anything drastic while Jason and Janet wander around the museum to look at the exhibition. Kamilah is initially cold and refuses to accept anything from Tahani, who flies into a rage and drives an ax into a table, leading to her and Chidi almost getting arrested. As they sit and wait, Tahani looks over Kamilah's paintings and notices a recurring theme in them, realizing that Kamilah's aloofness stems from their parents pitting them against each other throughout their childhoods. Tahani gives Kamilah a hug, which she reciprocates, and the two of them finally are able to connect and reconcile over their shared resentment of their parents. Kamilah makes her latest art project a collaborative effort, giving Tahani credit for inspiring her.

Back in Nevada, Eleanor refuses to believe her mother has truly changed for the better and is determined to expose her true identity to Dave and the rest of the neighbors during a PTA meeting at Patricia's school. Dave, however, already knew of Donna's true past. Michael asks Eleanor why she won't accept that her mother really has changed for the better and Eleanor tearfully admits that she's jealous of the fact that Donna actually is a good mother to Patricia because Eleanor wanted that mother herself, and accepting this means accepting Donna was always capable of changing but wouldn't do it for Eleanor. Ultimately, the two of them reconcile, with Donna acknowledging that she hadn't been a great mother to Eleanor and apologizing while Eleanor makes Donna promise to cherish her new family and do right by Patricia. As they leave to reunite with the others, Eleanor admits to Michael that she still feels emotionally scarred, admitting that Donna's failures as a mom left her unable to truly get close to anyone, much less ever tell them she loved them. Michael then reveals that one time, she did tell someone she loved them—and that person was Chidi.