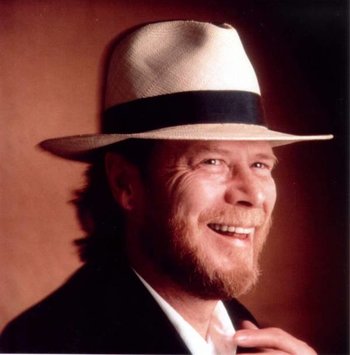 "Snooping as usual, I see."
Advertisement:

Getting his nickname from his 6'7" height, Baldry was one of the first British artists to perform blues music in the 1960s. He worked with many artists and bands of the time including The Beatles, The Rolling Stones, and the soon-to-be-famous Rod Stewart and Elton John (the latter got the second half of his nickname from Long John). As a solo artist, his best-known hit was the 1967 single "Let the Heartaches Begin".

Baldry moved to Canada in 1978, where he would live the remainder of his life. He continued to make music, and eventually also had a successful secondary career as a voice actor, most notably voicing Dr. Robotnik in Adventures of Sonic the Hedgehog.

I HATE THAT HEDGEHOG!

Dr. Robotnik has some of the most brrrrilliantly hammy lines of all!

Dr. Robotnik has some of the most brrrrilliantly hammy lines of all!