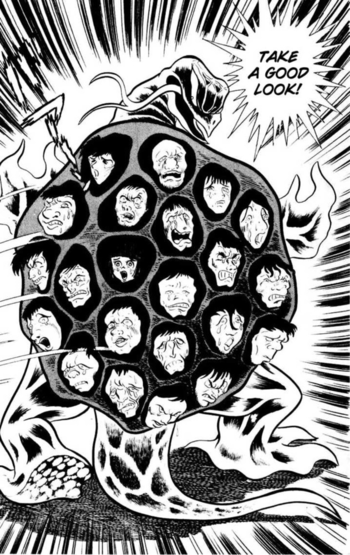 "Each one represents an ETERNITY OF SUFFERING AND MISERY! I LOVE to hear them suffering...even if you do it slowly, don't ya think?"
"When i was in the elementary school, i gouged out the eye of that bully Kuriyama and killed him!! It felt wonderful!!... That pig-woman who called me "disgusting"!! I raped her, then cut her up and ate her!! She repented too late!! The fool!!... I'm always just killing people!! I am an existence above humanity!!"
— Cadney, Amon: The Darkside of the Devilman

Even in the Crapsack World of Devilman, a world full of man-eating demons, mass murderers and rapists, where nearly all sides hold some evil within, a select few stand out.

Works are listed by release date.

1972 anime & Mitsuru Hiruta's manga based on the anime

Amon: The Darkside of the Devilman

AMON: The Apocalypse of Devilman OVA