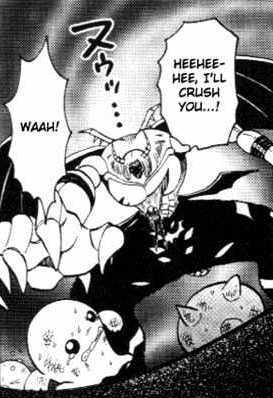 "[VenomMyotismon] is Myotismon's left behind hatred. In exchange for his intelligence, he gained ultimate power. He just is overflowing with the desire to kill, kill, KILL!"
"How dare Merukimon mess up my masterpiece! Some Digimon just don't know when to be deleted, I mean seriously, that guy was a pain until the very end! It's so foolish for any Digimon to think that it can ever defy the whims of a human. A time when humans and Digimon can leave together peacefully. What a silly and pointless idea to waste your life on! I can't stop laughing at the absurdity of it all."
— Akihiro Kurata mocking the final wishes of the recently-murdered Merukimon around his loved ones, Digimon Savers, Episode 25