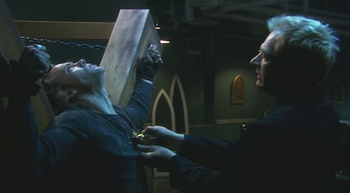 "The accused leaves the judge with no choice but to proceed with the inquisition."
"Tony had once seen an ancient Egyptian wizard devour the life of a baby while the baby's parents walked on, unaware their child was dead. The shadows were pieces of the Shadowlord. Dark memories. Memories of a world where those parents would thank the gods that their baby was safely dead. The shadow had known what he knew from the moment it had entered his body. Now he knew what the shadow knew. It was like seeing a private slide show of atrocities against the front of his skull. Had Tony been in control of his mouth, he would have screamed. Then cruel intelligence on the other side of the gate called the shadow home and the slide show stopped."
—Tony Foster on The Shadowlord, Smoke and Shadows
Advertisement:

Whether in various novels, or on TV, Vicki Nelson, Henry Fitzroy, and company have faced several foes in their supernatural investigations. These are the most despicable.