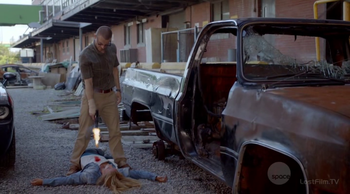 "Thomas LeBlanc preys on women. He tortures them and rapes them and kills them."
"De Rais predates Báthory by nearly a century. He was a French knight who fought with Joan of Arc. Legend says he killed hundreds of children. While some claimed it was occult sacrifice on behalf of a demon, trial records indicate he was closer to a modern serial killer, murdering children for sexual pleasure."
—Cassandra DuCharme on Giles Reyes/Gilles De Rais, Spellbound
Advertisement:

The men and women of The Otherworld, including Elena Michaels, live in a world where the supernatural stays hidden from humanity as a whole. Of all the various monsters and evils that threaten this world, these rank among the worst.